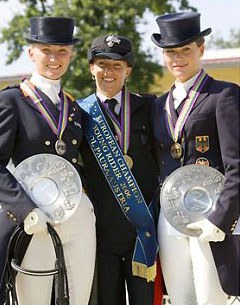 She won the kur to music with a 1,850% difference to the second placed silver medallist Lorraine van de Brink.

In the Kur to Music, Truppa got 75,700% for her excellent performance and won the Gold medal of the European Championships Dressage Young Rider 2006. The Dutch Lorraine van de Brink earned the silver medal with a result of 73,800%. Bronze was for the German Kristina Sprehe and her nine year old Oldenburger mare Rose Noir.

The Austrian riders had very good performances. Unfortunately, they were unable to got top places so they hoped. Markus Jungwirth from Niederösterreich became best Austrian Young Rider of 2006. He achieved 70,450% with the 13 year old mare Smart Cookie and finished eighth. Directly following him was Nikolaus Erdmann from Kärnte. On Danny Wilde he scored 69,400%. The third Austrian rider in the final, Sabrina Reinwald, became 15th with 64,150%.