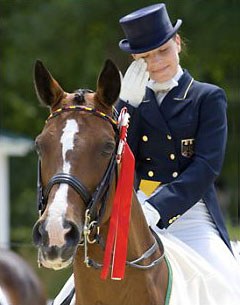 The German junior rider Verena van der Linde led in the Individual Test yesterday and today no one was able to outbid her result of 72,700 %. In second place are Tom Berg with Borodino and 72,150%. Dutch Diederik van Silfhout placed third.

Both teams, Germany and the Netherlands, were able to qualify all four riders for the freestyle on Sunday. Denmark qualified two riders. All other nations – Luxembourg, Sweden, France, Spain and Austria - will take part at the final with only one rider.

Only Katharina Wünschek from the Austrian team was able to get enough points for the freestyle on Sunday. So the 18 years old Katharina from Vienna is the best Austrian rider of the junior class. After a bad performance in the team competition, she and her 15-year old Hanoverian gelding Atoutprix convinced in the individual test today. The result was 67,000 % and rang 14.