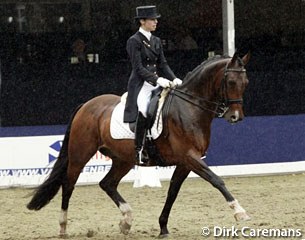 According to the KWPN website, Dutch young rider Lorraine van den Brink has replaced Desiree Senden (pictured) on the Dutch team that will be competing at the 2006 European Young Riders Championships in Stadl Paura this weekend.

Senden was selected as team member with her KWPN bred horse Noblesse (by Cabochon) but had to withdraw because of an injury. The first reserve in line, Lorraine van den Brink and her Dutch warmblood Murdock (by Balzflug), replaced Senden. Van den Brink has left for Stadl Paura on Sunday with the three other Dutch team riders and chef d'equipe Jan Peeters.