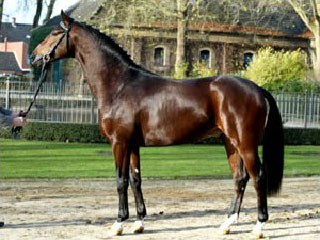 The NRW licensed stallion Flamur has passed away in a tragic accident on July 13, 2006. The 3-year old stallion fractured his neck falling down and died instantly.

The Rhinelander branded Flamur is by Furst Heinrich out of Pique Fleur (by Pik Bube I x Romadour II x Abhang II). He is bred by Heidi Seerden and was prepared for the licensing at Heinrich Ramsbrock's stable. Flamur got licensed at the 2005 Westfalian/Rhinelander stallion licensing in Munster, where he finished in the champion's ring but he did not become premium stallion.

Flamur was owned by the NRW State Stud in Warendorf and stood up for stud at the stallion station in Gevelsberg.