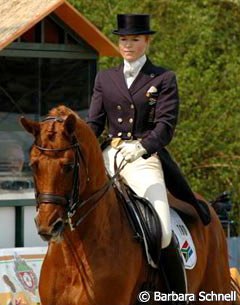 , Hobday achieved her qualification scores at the CDI Munich in May and the CDI Outdoor Gelderland in June.

Hobday's sponsor Callaho, a stud farm based near Kimberley (RSA), is the owner of the chestnut stallion Wenckstern. "Callaho Stud are major contributors to equestrian sport in South Africa and patrons of mine. They assisted me in acquiring Callaho Wenckstern. I have had five Grand Prix’s with him to date, so our relationship at that level is still new," Hobday told Eurodressage.

With her previous Grand Prix horse Edelmann, Hobday competed for South Africa at the 1998 World Equestrian Games in Rome and qualified for the 2002 WEG in Jerez de la Frontera, but was unable to go due to an injury. Hobday also qualified for the 2000 and 2004 Olympic Games but did not compete in them. "Due to reasons beyond my control I was unable to attend either of them. Edelmann is now 20 years old and lives a luxurious pensioners life in England. He has been retired for two years," Hobday explained.

Commuting between South Africa and Germany, Hobday is usually based in Germany with her trainer of nine years, Jonny Hilberath. On the road to Aachen, Hobday has planned to compete at the CDI Falsterbo and CDI Lingen and possibly at the CDI Verden. "Our training plan between now and WEG, in between the upcoming shows, is to try to improve as much as possible and to reach the best physical and mental form we can," Hobday said.