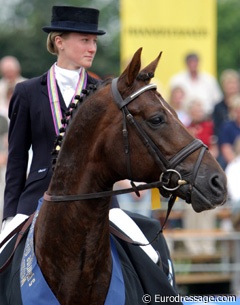 In 2003, the 3-year old Westfalian licensed stallion Damon Hill received an 8.3 mark at the Bundeschampionate in Warendorf, Germany, and did not qualify for the Final round in his attempt to become German Champion.

The panel of judges received a concert of whistling and booing from the audience after the announcement of that insufficient score. Everyone in the stands wondered why the judges didn't see the quality this liver chestnut stallion displayed in the dressage ring. In the breeding ring, on the other hand, he has already proved his potential by becoming a premium stallion and performance test winner in 2002. Was this 16.1 hh measuring stallion not living up to the dressage standard Bundeschampionate judges uphold?

Yes he was, he still is and he's exceding expectations by far. At the 2005 World Championships for Young Dressage Horses in Verden, Germany, Damon Hill reached such a high level of quality in his movements and performance that no other 5-year old at the show was able to follow in his wake. Ridden by Helen Langehanenberg, who took over the ride from Ingrid Klimke after breaking her shoulder six weeks ago, Damon Hill won both the qualifier and finals with 9. marks. 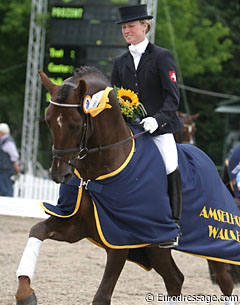 In the qualifier on Friday, Damon Hill showed a superbly elastic and engaged trot with his legs just flying under his body. For this gait he scored 9.6. He was the first horse to produce a breath taking extended canter with real lengthening of the frame (9.0). His walk was relaxed and had two hooves overtrack (9.2). Sometimes the liver chestnut tilted his head a bit in the bending and there was sometimes light tension, which resulted in an error in the rhythm in the first extended trot. His overall score of 9.26 was the highest of the class and granted him the victory.

In the finals on Sunday, the new judges panel scored Damon Hill's trot even higher and awarded it a 9.80, while the canter got upgraded to a 9.2. The walk, however, got 8.60 from them. The horse didn't look as fresh as on Friday but was still superior. The extended canter was not as explosive and there was a small error in the transition from walk to canter. The simple changes were beautiful though. 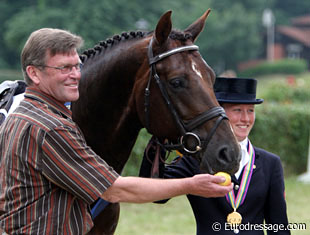 The judges praised him for his outstanding self carriage and cadence "His extended trot is that of a Grand Prix horse," judge Plewa said. "His canter is rhythmical, elastic and uphill and he's willing to take weight on his hindquarters. He's very obedient and has lots of expression. The contact with the bit was not always steady, but he has much potential and is a very ambitious horse." With a 9.02 score, the judges awarded him the 2005 World Champion's title in the 5-year old division.

The 5-year old Damon Hill is by Donnerhall out of State Premium mare Romanze (Rubinstein x Parademarsch) and is bred by Heinrich Sauer and owned by Christian Becks of stallion station Becks in Senden, Germany.