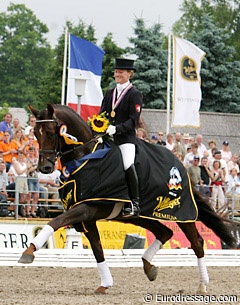 The Westfalian stallions Damon Hill and Florencio have won the 2005 World Championships for Young Dressage Horses in Verden, Germany. The two licensed sires were the undisputed winners of the qualifier test on Friday and in the Finals on Sunday

they wielded the axe of power once more by being the only two horses to achieve a 9. mark at this year's Championships.

In the 5-year old division, Helen Langehanenberg rode Damon Hill (Donnerhall x Rubinstein) to a winning score of 9.02. Despite a small mistake in the transition from walk to canter, Damon Hill excelled in his three basic gaits and his rideability. Langehanenberg rode beautiful simple changes and presented her horse with much brilliance and energy in the two tests. The trot was Damon Hill's highlight gait for which he earned a 9.8.

"I'm happy," an extremely modest Langehanenberg said in the press conference. "I didn't train Damon Hill, but he's in training with Ingrid Klimke. Six weeks ago she broke her shoulder and asked me to ride him." The young Helen Langehanenberg has been a working student at Ingrid Klimke's stable in Munster, Germany, and Klimke realized that Helen would be the right match for Damon Hill. A perfect match it has been, because the dynamic duo was by far the best combination in the 5-year old division.

German Holga Finken won the silver medal in the 5-year old division riding the licensed Oldenburg stallion Donnerball (Donnerhall x Alabaster). The liver chestnut is a refined, elegant horse with three lovely gaits. He has an elastic trot, a groundcovering walk and a decent canter. His total mark of 8.86 was slightly overscored, but Finken, of course, did not complain.

The bronze medal went to the South German Nadine Plaster aboard the Baden Wurttemberger bred mare FBW Dejavu (Dacaprio x Gluckspilz). The liver chestnut mare has a breath taking trot with superb engagement and wonderful knee action, but in the canter she's needs more elasticity through the back. Nevertheless, Plaster and Dejavu deserved their 8.82 mark, which ranked them third in the Finals. 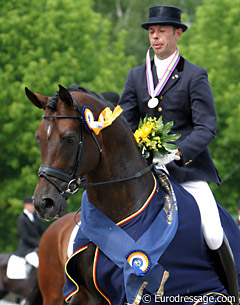 It was no surprise that Hans Peter Minderhoud and the Westfalian stallion Florencio renewed their World Champion title in the 6-year old division. Last year, Florencio was the highest scoring horse ever at the World Championships and this year he eclipsed his peers once more. With an overall mark of 9.48 and a 10 for canter and 9.8 for trot, he showed a level of elasticity and engagement rare in a young horse.

The silver medal went to British Damian Hallam on the Oldenburg gelding Spirit Freedom (Sion x Figaro). Spirit Freedom showed great maturity for the 6-year old test requirements without looking overtrained. The judges praised the combination for its superb half passes and active trot work. Their 8.90 score put them ahead off bronze medallist Carola Koppelmann on the Trakehner Insterburg (Hohenstein x Giorgio Armani). The black Insterburg excelled in the canter work with decent flying changes and a strong extended canter, for which he scored 9.2. Their total mark of 8.72 placed them third in the Finals.

Canadian Lorraine Stubbs sat in the 6-year old judges' panel and stated that she had much fun judging the class. "There were good horses and it was an interesting final test with the flying changes and half passes," Stubbs commented,. "The 5-year olds are easier, but with the 6-year olds you don't just judge the movements, but also the training and future potential as FEI horses." 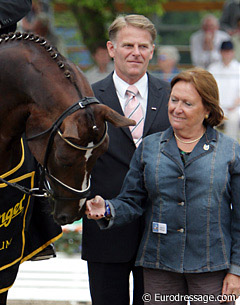 FEI Dressage committee chairwoman Mariette Withages served as technical delegate in Verden. "It was a super show and on an organisational level the best one so far. The ring for the young horses was ideal and they didn't have to move arenas for the finals," Withages commented.