Damon Hill and Florencio In the Lead 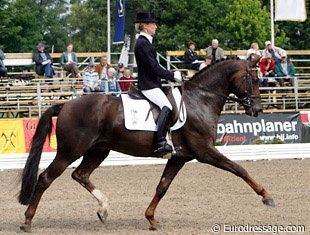 The Westfalian stallions Damon Hill and Florencio are in the lead in the 2005 World Championships for Young Dressage Horses in Verden, Germany. Both licensed stallions respectively won the qualifier test for the Finals in the 5 and 6-year old division.

Remarkably they were the only two horses to achieve a score higher than 9.0.

The liver chestnut Damon Hill (Donnerhall x Rubinstein) was the shining star in the 5-year old class. Under the Munster based Helen Langehanenberg, he showed an extremely rhythmical and active trot. His walk had two hooves overtrack and his canter was naturally uphill and very ground covering. There was a bit of tension in the counter canter and a small rhythmic lapse in the extended trot, but Damon Hill was just breath taking. He scored 9.26 and was far ahead of the second placed Rusty (Rubinstein x Weltmeyer) who received a very generous 8.72 for a test with tension.

In the 6-year old division, Florencio was just a league of his own. Under the Dutch Hans Peter Minderhoud, the dark bay stallion showed bounce beyond compare in the trot. Both the collected and the extended walk were outstanding and the canter work was just lovely. The two flying changes were ok. With 9.38 the duo is well on its way to prolong their title of World Champions.

Dutta Stands Out in the American Team 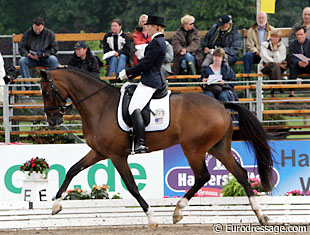 In the American delegation, it was Wellington based Susan Dutta who rose to the occasion and became the best performing American of the team of three.

In the 5-year old class, Dutta rode a perfectly clean test with the Oldenburg gelding Currency DC (Clintino x Classiker). The bay showed a very honest contact between hand and bit and was very attentive to Dutta's aid. The trot was well engaged and Currency stayed light. Only in the corners he lost a bit of balance. The walk was good and the canter showed good self carriage. Dutta can be praised for her professional presentation of her horse. She rode the cleanest test of all and scored 8.30 and placed tenth.

Hokan Thorn and Donegal (Davignport x Grundstein) ranked 29th with a 7.04 mark. Donegal's conformation is quite old fashioned compared to the other modern athletes competing in Verden, but the horse is extremely rideable and focused on his rider. The walk was the highlight gait with two hooves overtrack. The trot was good, but needed to show more push. The canter work was decent as well, but looked a bit plain. Thorn and Donegal had a clean ride, but there was no real brilliance in this combination. 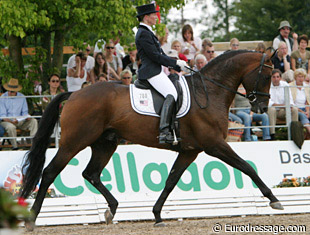 Susanne Hassler and Royal Prince (Rohdiamant x Prince Thatch xx) were the only American combination in the 6-year old division. Last year, the duo was one of the big revellations of the show. This year, Verden was a very anti-climactic experience for the gifted pair.

Hassler started her test with a very pretty, flowing trot tour. However, when she halted for the rein back, Royal Prince didn't understand the message and showed some resistence. This disobedience shooked up Hassler and she seemed to have lost confidence in her horse. The walk was tense as Royal Prince broke into trot in the extended walk. Hassler could not settle him down in the canter and lost her own concentration. Her horse fell out of the canter at the end of her right extended canter. Because the canter tour was tension frought, the second flying change was late on the aids.

The judges showed no mercy and scored the ride 6.76 (21st place). Hassler has to ride the consolation finals on Saturday afternoon and can redeem herself in that class. If she ranks in the top three, she can earn a berth in the big finals on Sunday. 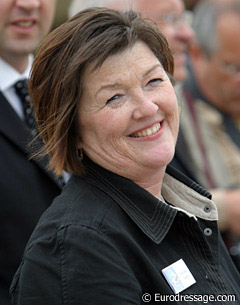 Canadian judge Lorraine Stubbs judged the World Championships for Young Dressage Horses for the first time in her career. Her first day on the job was sitting in the judges' panel for the 5-year old qualifier. She teamed up with Dieter Schule (GER) and Andrew Gardner (GBR) to judge the world's best 5-year olds.

Right before her judging job in Verden, Stubbs sat together with Schule and Gardner and discussed the aspects they would put special stress on. "We appreciate purity of gaits, regularity and the ability to self carry," Stubbs commented. In her opinion Damon Hill, the winner of the class, was "very high across all three requirements. He was very obedient and had good balance."

Stubbs explained that she judged Currency DC at the U.S. Eastern League Finals in May and said that "he improved a lot in one month time." According to her, Donegal needed "more impulsion, more expression and he need to be more actively behind."

Judge Andrew Gardner, who is also a World Championships' rookie judged, confessed his love for working in group. "It's very different to put one mark on each movement. Here, we discuss the quality and the way of going. We really debate."

Stubbs and Gardner will be back in action on Saturday for the 5-year old Consolation Final.