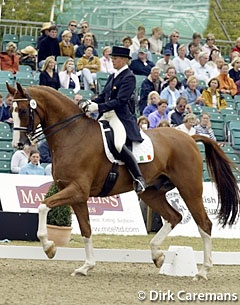 Heike Holstein added another national title to her already impressive haul at the Irish dressage championships from Friday 3rd to Sunday 5th September 2004.

Riding the imposing 12 year old hannovarian gelding Welt Adel in the Horwath Bastow Charleton Grand Prix she was first into the main arena on Sunday afternoon to perform her test. The gelding scored 63.61% in front of a very experienced panel of international judges headed by olympic judge Wojciech Markowski along with former world and olympic champion Christine Stueckelberger and Neils-Erik Boechman Larsen from Denmark. Yvette Truesdale and Accolade saw their challenge for the top honours fade when they ran into difficulties with the half passes either side of the centre line and with the one time changes. This victory in the the Grand Prix saw Heike claiming her ninth national title since 1990 when at the age of eighteen she won her first one on Bernstein in Powerscourt.

The championships ran for a full three days for the first time ever this year and the format of some of the classes was changed as well. In the preliminary, novice, elementary and medium championship classes all competitors had to ride two tests whereas in previous years only the top fifteen qualifiers from the first test, up to elementary level, went on to ride a second test. Previously in the medium championship competitors had to ride only one test. The Blarney Riding Centre preliminary championship was the first class in the main arena on the Friday morning. Christine McBride and Silly Sally headed the leaderboard after the opening round but they were unable to maintain their advantage in the outdoor arena the following day and dropped to third place when they were overhauled by the eventual winner Jonie Griffin with Irresistible and David Keane with the 11 year old Oldenburger gelding Laynes 5 who took second place.

Rolf Seidel was seeking to retain the elementary championship for a second year and he got off to a good start when topping the leaderboard on Friday afternoon with Lorenzo on a score of 66.56%. The pressure was on the following day when his second score of 64% was headed by four other riders including two from the Dollanstown contingent, Emma Kieran with Life Style and Sandra Blake and Saint Emillion. However his overall performance on the nine year old hannovarian chestnut gelding saw him keep his nose in front by a margin of three marks for the win. Rolf had the added satisfaction of owning the horses in first and second place when Sandra Blake and Saint Emillion held off the challenge from the twelve year old Danish warmblood gelding, Mitdgard ridden by Rosemary Gaffney. The elementary championship was sponosored by Northern Ireland Dressage and Lynne McCormick from Ballynahinch, County Down slotted into fourth with Ringfort Nimmerdino just ahead of Emma Kieran and Life Style.

The Tony Goodwin and Sons Saddlers novice championship saw some high scoring particuarly from Corkonian Sophie Mackey. She set a blistering early pace when posting a score of 70.17% with the eight year old Danish warmblood gelding Agent and followed that up with another good score of 68.52% in the outdoor areana on the final day of the championships to be a convincing winner overall. Suzanne Arthur from Ennis, County Clare and the very promising four year old bay gelding Totus Tuus took second place. Margaret Coonan and the ten year old Bavarian mare Mirabell 105 maintained a consistent scoring rate over the two days which was good enough to secure the third place rosette for the Sallins resident.

Young rider Christiana Manoras was in great form at this years championship and it was no surprise when she ended up being crowned the new under 21 national dressage champion. She certainly caught the eye of both olympic judges, Dr Markowski and Mrs Verbeek van Rooy, with her european young riders championship mount Kanjo. Having just missed out on winning the Sven Kapp sponsored Prix St Georges championship last year she made the class her own this time with some impressive lateral work to score 64.63%. Anne Marie Dunphy and her international campaigner Heritage Egano S scored 62.63% which was good enough for second place with Christiana's european young riders team mate Kate Dwyer and the veteran Montana Bay slotting into third on 62.25%.

Both Christine Stueckelberger and Sally Merrison had Christiana and Kanjo as the clear winners of the Baileys Prix St Georges freestyle later in the afternoon making it a double for the County Clare rider. On this occasion Kate Dwyer and Montana Bay took second with Brennanstown resident Gerald Bloomer on the fouteen year old Reinlander gelding Talisman in third. Yvette Truesdale won the Kevin O'Sullivan Intermediare II championship for the second year in a row with Accolade when seeing off the challenge of Donie McNamara and Queen of the Night.

The K K interiors potential dressage horse final took place in the main arena at lunchtime on Sunday. The five qualifiers were put through their walk, trot and canter paces by senior British judge Sally Merrison before she retired to make her decision. The scoring for the class is weighted in favour of the potential of the horse and in particular its trainability. There were two four year olds in the final this year, Ringfort Quickstep by Jaywalker out of Renkum Hollanta. This one was ridden by Polish rider Janusz Szulc and is owned and bred by Harron Eakin Farms. Kingsdale Pax by Killossery Star out of a mare by Ceylon was bred by Donie McNamara and ridden by Sullivan Gatz. Rosheen Yeats a five year old Irish Draught grey stallion by Hunting Field Rebel out of Glanduff Breeze was ridden by David Freeney and Audrey Hickey rode Glitzen a five year old bay mare owned by her mother Ann. Heike Holstein rode Elgin Diamond a five year old gelding by Carrig Diamond Lad out of First Consul mare. The sire stands at Byrnes Grove Stud, Ballyraggett, County Kilkenny. Ultimately this turned into a two horse race between Kingsdale Pax and Elgin Diamond with the latter just getting the nod from the judge to win the final for 2004 and Heike Holstein was duly presented with the Solly Perpetual Trophy by Kevin Kavangh on behalf of the sponsors.

Anne Marie Dunphy and the hugely impressive seven year old Hannovarian mare Heritage Nofretete made sure of victory in the Vinesgrove Stud and Racing Medium Championship by winning both test 75 on the Saturday morning in the main arena and test 61 on Sunday for a combined score of 68.66%. The qulaity of her collected movements and lateral work in both tests gave her the edge over the rest of the field. Yvette Truesdale picked up the ride on Has to be Fun early in the summer and the partenership has proved to be a successful one. They duly took second place with Rolf Seidel and the very consistent Lorenzo taking third.

Yvette Truesdale had a sparkling run of successes on the sunshine tour earlier in the season with Wishfull Thinking and they were always going to be the combination to beat in a hotly contested Ballintaggert Stud Adavanced Medium Championship. Judges Piet Westveer and Frances Verbeek Van Rooy from the Netherlands were on duty for this one and just over three percentage points divided first to sixth in this class. The Dutch officials had Wishfull Thinking in pole position ahead of fellow northern competitor Laragh Hamilton and Commanding Officer, the exact same line up as the year before. Indeed Northern Ireland riders took four of the top six placings with Yvette picking up fifth on Has to be Fun and young riders chef d'equipe, Jennifer Somerville taking sixth on the ever improving Supreme Edge gelding Mr Bingey. Anne Marie Dunphy headed up the southern representation on the prize list taking third with Heritage Nofretete and Heike Holstein slotted into fourth with the Paul Behan owned Weltmeyer gelding World Fire.

Doubles were the order of the day at the championships this year and with Heike Holstein, Christiana Manoras and Yvette Truesdale all having visited the winners enclosure on more than one occasion. Anne Marie Dunphy was determined to join them. The Arachas Insurance Intermediare I championship presented her with her chance. This time she was riding the imposing 11 year old gelding Heritage Egano S by Espri out of Felicitas. Danish judge Neils Erich Boechmann Larsen positioned on the long side at E joined Christine Stuckelberger and Dr Markowski for this class. There was quite a difference in the marks from the judges for this class with the Danish judge scoring some surprisingly low marks in comparison with his two colleagues. Anne Marie produced a very professional performance to secure the win with Sue Smallman and Oakengrve Ideal taking second place. The under 21 National Dressage Championship was won by young rider Kate Dwyer from Dunboyne, County Meath last year and she missed out on retaining her title when after tying on 60.67% with Christiana Manoras and Kanjo only to lose out on the collective score and drop out of the first three placings in this class which was the decider for the title.

The Leinster region team of Margaret Coonan and Mirabell 105, Christina Keane and Glenmore Ash and Emma Kieran and Life Style prevailed over the North Munster team by a margin of less than one per cent to lift the Spruce Lodge Shield as regional team champions for 2004.