Brave Effort of Dresemann, A Note on Spargo and Foto Tyme 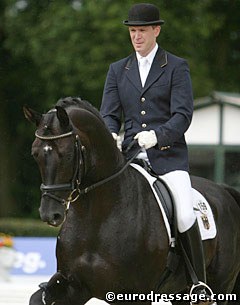 We want to compliment owner Theodor Schurf and stallion keeper Matthieu Beckmann for their bravery of bringing Dresemann back to the public.

When Dresemann won the Bundeschampionate two years ago with the highest points (four 10's) ever given by judges at that show, the stallion made his fame for life and no longer needed to prove himself in the show ring. It was generally known that Dresemann would not return to the Bundeschampionate and it was questionable whether the black Hanoverian stallion by Daidalos x Wolkenstein II would ever see the show ring again. Fortunately, Dresemann was selected to compete at the World Championships and we were very eager to see this black star move.

What strikes first upon seeing Dresemann, besides his beauty of course, it his beautiful front leg. What shoulder freedom and elegance! And fortunately, Dresemann is not too bad behind either. He's not a hindquarters wonder, but he definitely exceeds average hind leg quality.

Ridden by Oeliver Oelrich and not his steady rider Elisabeth Niehues-Rembeck, Dresemann had a good first round in which the trot was the best movement. The canter was very good, but the walk could show more overtrack. The pair finished 9th with 8.42. 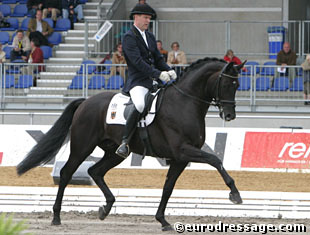 In the finals, Dresemann started with a superb trot tour. "His trot is powerful, uphill, active and free in the shoulder," Loriston-Clarke said. Dresemann was on his way to a very high score, when he suddenly saw a ghost in the distance which scared him. The wind blowing hard in the arena did not help either to make the black stallion relax, so he spooked quite hard and cut corners at C. The canter was, therefore, more tense, but the horse still showed a fantatic extended canter.

It was a pity that Dresemann tensed up so much, causing him to lose several points. The pair finished 13th with 7,52, but nobody in the audience cared that the horse had a bad day. The crowds gave him a big round of applause and everyone knew that he has champion's potential and a bright future ahead of him.

A Note on Spargo and Foto Tyme 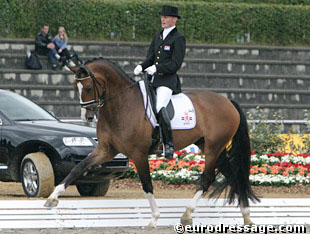 The best placing Dutch combination in the 5-year old finals at the World Championships was the young rider Theo Hanzon aboard Spargo, a bay KWPN bred stallion by Krack C x Boreas.

Hanzon rode Spargo with light contact with the bit. The bay stallion, who looks much more like a sport horse than a stallion, has a beautiful elegant trot with a far reaching front leg. He should be a bit looser through the body and swing more, but was nicely kept in the frame by Hanzon, who recently graduated at the Horse Academy in Deurne, The Netherlands. In the first round the pair finished eight with 8.48. In the Finals they were also eight with 8,32. 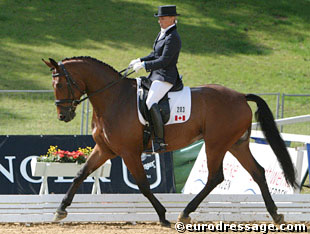 The Canadian representative in Verden was Evi Strasser with the Westfalian bred Foto Tyme, a Florestan x Delphi offspring. The bay gelding has a super walk showing much overtrack. The trot and canter are also very nice and correct, but lack a bit pizzazz. The horse has a functional hind leg, but could be a bit more active and electric.

In the first round, Strasser had her best ride scoring 8.60 and placing 7th. In the Finals, Foto Tyme was not always constant on the bit. He regularly yanked lightly at Strasser's hand, who kept her cool and continued to ride a very clean test. The judges praised Foto Tyme for being "an elegant, compact horse. The trot has a clear rhythm but needs to take more weight on the hind legs. The canter is correct, but can be more uphill and more ground covering. There was also some lack of attention," Loriston-Clarke said. Strasser finished 10th with 8,02.