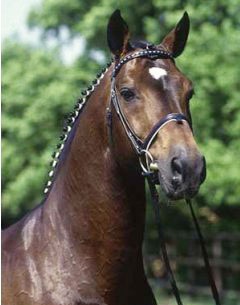 Foundation sire Raphael has passed away at his home stable Amselhof Walle in Winsen/Aller, Germany. The 25-year old Raphael was suffering from old age and it was in his best interest that he was put down.

Raphael was bred by Heinrich Hüppe and owned by Heike and Joachim Kemmer. The dark bay stallion was by Ramiro out of Annekatrin (by Abhang I x Wotan).

In 1981, Raphael became the reserve champion of the Oldenburg Stallion Licensing and finished third in his Stallion Performance Test. Raphael hardly produced any competition results, but immediately proved to be an important sire. He sired 22 licensed sons, including Radiator, Rocky, Ragazzo, Ravallo, and Raphanus, and produced both exceptional show jumping and dressage offspring.

Raphael's offspring has won to date 1,791,539 € of prize money. His most famous competing get are Radiator under Rene Tebbel, Robinson under Richard Spooner, the Grand Prix horse Reveille under Kamilla Dupont. At the 2003 Westfalian Stallion Licensing, the Reserve Champion Ruter was by Raphael (out of a Larome dam).