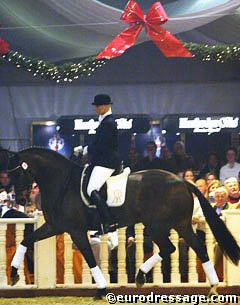 One of the most unique and talented dressage horses of this decade has been sold for 2,500,000 Euro to the Netherlands at the 24th P.S.I. Auction in Ankum, Germany. With single bids of 100,000 Euro, Poetin's price rocketed quickly up to two million.

Ten parties were interested in the Sandro Hit x Brentano II mare, who became World Champion and Bundeschampion this year by mesmering riders, judges and audience with her beauty and exceptional movements. Poetin, who was purchased by Paul Schockemohle in September 2003, was therefore the main attraction of the auction and lured many extra visitors to the Artland Sporthotel in Ankum, where the auction annually takes place.

Uwe Heckmann was hardly able to control his blood pressure and almost every spectator held his breath in amazement. An excentric Dutch couple, Peter and Patty van der Zwam purchased the delightful mare for 2,5 million Euro and broke Lord Sinclair's auction record of 2,8 million Deutsch Marks by simply doubling the price. The Van der Zwams own breeding stable De Keizershoeve in Kessel, The Netherlands, and will be using Poetin as a sport horse and brood mare.

The second most expensive dressage horse was also sold to The Netherlands. Former FEI Dutch Pony Team Member Mireille Witlox purchased the licensed and performance tested Oldenburg stallion Dreamcatcher. This powerfully moving stallion (Day Dream x Rubinstein I) finished third this year at the Bundeschampionate and was considered the second best horse of this year's P.S.I. collection. Dreamcatcher has an incredible amount of self carriage and potential. Witlox paid 406,000 Euro for the dark bay stallion. 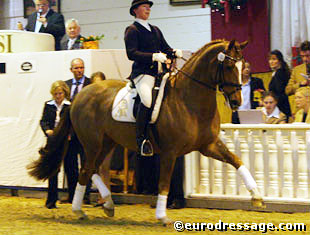 Third most expensive dressage horse was the lovely Golden Choice (Grand Cru x Westbury). Americans Tim and Susan Dutta purchased the chestnut mare for 280,000 € and they were advised by trainer Klaus Balkenhol to bid on this horse. "We just sold our Grand Prix horse Chalston and another youngster and we wanted to invest into a new talented horse," Dutta explained. Golden Choice was Susan's personal favorite because of her lovely gaits and superb rideability