Donatelli To Stand At Shooting Star Farm in the U.S.A. 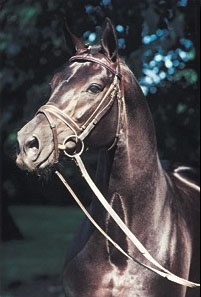 Tolman is excited to import such a fine stallion. "Donatelli is a great choice for North America for a number of reasons, " he said. "He is approved in Hanover, Oldenburg, Westfalen, and Rhinelander studbooks, plus eligible as a Register A stallion
with the KWPN. Furthermore, the Donnerhall x Pik Bube cross is hard to beat, not only is Donatelli an ideal product of this cross, his mare line has also produced incredible sport horses."

Shooting Star Farm had the KWPN stallion Zeoliet up for stud, until his untimely death on February 13, 2002. Although Tolman is very much KWPN oriented, he believes the Oldenburg stallion Donatelli is an excellent choice for his breeding program. "With the advent of Register A, I've seen a number of pedigrees tried on the Dutch mare base. I think the most successful have been the Donnerhal x Pik Bube stallions and the Florestan sons," Tolman explained. He also added that, "with Donatelli, we get a stallion who has competed successfully, produced successfully, is from a proven dressage niche, and a proven individual mare line. That's a hard package to beat!" 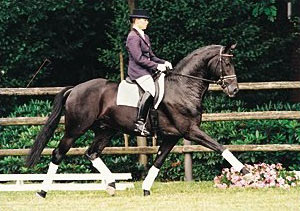 Donatelli is a 9-year old stallion by Donnerhall out of Granny's Girl (Pik Bube I x Graphit) and was bred by Günter Bastian in Bargteheide, Germany.

He became 1-g Premium licensed at the Oldenburg Licensing in Vechta in 1996 and finished fifth overall in the Stallion Performance Test at Neustadt/Dosse in 1997. Donatelli achieved a score of 121.26 points. Donatelli competed in the riding horse tests as a youngster and was trained up to Prix St Georges level.

Owned by Ludwig Kathmann, he has mainly been focused on his breeding career Donatelli sired multiple auction horses and premium foals. Paul Schockemohle's Dynamico (Donatelli x Feinbrand) and the 2001 approved Divertimento are his licensed sons.