Pablo to Three Crown Farms in The United States 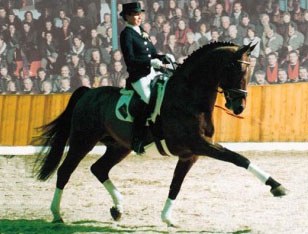 We already knew this news more than a week ago, but decided the issue needed a follow-up. The Westfalian stallion Pablo has been sold to Three Crown Farms in Woodinville, WA, United States.

Pablo is a 14-year old bay stallion by Pilot out of Monic (by Matrox x Lancelot) and was premium licensed in Munster Handorf in 1990. For his Stallion Performance Test in Medingen in 1991, Pablo scored a nine for trot, canter, rideability, jumping ability and performance suitability. He was Reserve Champion of the test, finishing second overall with a score of 136.22 points.

Pablo was competed in Germany from A to M level in show jumping and participated in the Bundeschampionate in 1993 and 1994. He has over ten licensed sons, of which Pablos Glück, Pocahontas, Presley, Pablo Picasso, Prinz Pablo Pablito and Papparazzo are the most famous.

Although Pablo has pure show jumping bloodlines and was shown as a jumper, the stallion is of high value for dressage breeders due to his superb basic gaits. Three Crown Farms is mainly dressage oriented, but believes Pablo's jumping talents to be an additional forté. "We consider Pablo's talent and hereditability for jumping talent to be a super bonus for the mare owners we serve," Colette Ross-Prince said, adding that, "the extreme shoulder-freedom and strength from behind sought after for dressage is exactly what the jumping horses also need for big fences."

Three Crown Farms likes to maintain a wide perspective on breeding and keeps its options open by adding a versatile stallion such as Pablo to their breeding program. "We want the absolute best movement and mind for dressage, but with talent for hunter/jumper/eventing if the mare or owner should want to go in that direction," Ross-Prince explained.