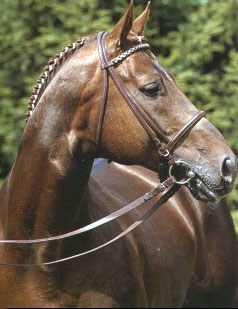 Brentano II received a beautiful laurel in Verden and his breeder Dr. Max Schulz-Stellenfleth got a check of 10,000 Euro and the Wohlkang statue.

Brentano II was born in 1983 at Max Schulz-Stellenfleth in Kehdingen, Germany. He is by Bolero out of Glocke (by Grande). Brentano II's damline is one of the most important for Hanoverian breeding, as it roots back to the Schumann-mare S449. Stallions Garibaldi I and II, Wolkenstein I and II and Beltain, and Beatriz Ferrer-Salat's Grand Prix horse Beauvalais are all related to Brentano II. Westfalian Beltain (Bolero x Grande) is currently a popular stallion in Warendorf, because his son Belissimo M has achieved great successes at the Bundeschampionate under Holga Finken.

Brentano II became Stallion Licensing Champion in 1985 and was acquired by Celle State Stud. In his Stallion Performance Test, he achieved the best dressage score and finished second overall with 129.97 points. In 1986, Brentano II finished fourth in the Bundeschampionate. He was trained to Prix St Georges level and participated for many years in the Celle Stallion Parade. In 1987, Brentano II moved to a stallion station in Natbergen, and then to Ankum.

Brentano II sired 68 state premium mares and 15 licensed Hanoverian sons. Daughter Bona Dea II was the Champion Mare at the 2000 Natje-Niebuhr-Show and together with her full sister Bona Dea I she won the Ratje-Niebuhr Prize. Nineteen Brentano II descendants were so far sold through the auctions, amongst them Debbie McDonald's Brentino, Brasseur P, Bandito and Gestut Sprehe's Bon Jovi.