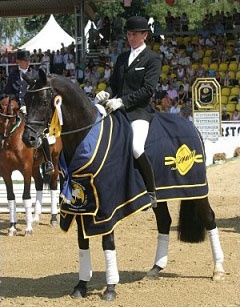 Holga Finken and Furst Heinrich are on a parabola to success since winning their World Champion's title in Verden. Their victory in the 5-year old division at the 2003 World Championships for Young Dressage Horses, was a accumulative process.

In the first qualifier he finished third with 8.70 and won the individual finals with 9.30. Fürst Heinrich's rider was the accomplished former auction rider Holga Finken. Following the Verden title, the black stallion Furst Heinrich was proclaimed Westfalian of the Month August 2003.

The World Champion's title often creates a wake of success, just as it did with the Oldenburg stallion Sandro Hit, when he won the 1999 World Championships. Not only does such a title stimulate the sport career of a horse, but the breeding career gets an enormous boost due to the international visibility the stallion enjoyed in the press. Therefore, after Verden, Fürst Heinrich became Germany's favorite young dressage horse and breeding stallion.

At the 2003 Bundeschampionate, Furst Heinrich and Finken placed second in the 5-year old qualifier, but had to withdraw on Friday due to an injury. Despite this setback, Furst Heinrich's owner, Gestut Sprehe, had no time to mourn. Sprehe's stallion had to breed much this season and his last year's foals became a targeted prey for many auction shoppers. 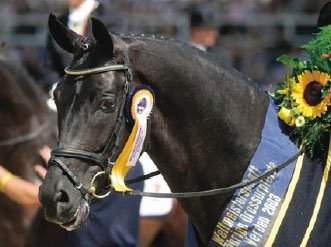 Furst Heinrich is a 5-year old Westphalian bred stallion by Florestan I out of Dawina (by Donnerhall x Weinberg). He was bred by Heinrich Ramsbrock from Menslage, Germany. Rambrock discovered Furst Heinrich's dam Dawina at the 1997 Munster Handorf Auction, where the mare was being presented under the name Dance of Joy. He purchased the horse before it had the chance to be auctioned and bred her to Florestan, resulting in a beautiful 1998 colt, Furst Heinrich. 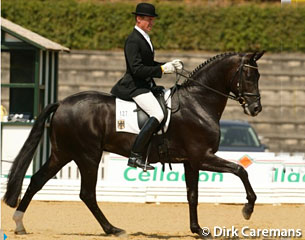 As a two-year old, Furst Heinrich was presented at the stallion licensing in 2000. He became a premium stallion at this 10th NRW Stallion Licensing and attracted the interest of stallion owner Sprehe. Gestut Sprehe, located in Löningen, Germany, purchased the black stallion in the after-sales. In 2001, Furst Heinrich won the 30-day Stallion Test at Munster/Handorf. After fulfilling all his licensing duties, Furst Heinrich was put in training with Sprehe's resident rider Holga Finken, a partnership which has definitely been worth the time and effort.