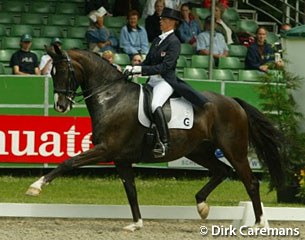 Although selected as the anchor rider for the Dutch dressage team at the 2003 European Dressage Championships, Anky van Grunsven announced today that she won't be competing her Gestion Salinero at Hickstead for the European Championships.

Anky's Hanoverian gelding Gestion Salinero (by Salieri) has been lightly injured. The injury seemed to minor, but as the horse would only be at 75% of his capabilities, Anky did not want to take any risk. She considered it best not to ride Salinero at the European Championships and has, therefore, withdrawn as a participant.

Chef d'equipe Jan Peeters commented that, "it is a set back, but we still have medal chances. The other team members will be even more focussed to strive for a medal."