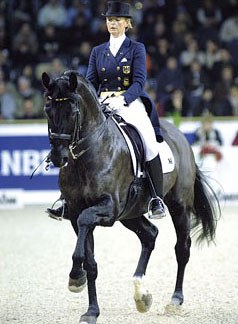 The Nurnberger Burgpokal finals are determined by two tests. The first Finals' test is the qualifier to select a top three, which will compete each other in a the 'true' Siegerpreis finals. Scoring 74.56% with a record-breaking ride in the Prix St Georges Special, Linsenhoff showed that her mare is currently Germany's best Prix St Georges horse and demonstrated that the Siegerpreis Finals would just be a formality.

In second place was Birgit Finken aboard her dark bay Diamond Fritz with 74.11%, while the third placed Anja Plonzke and her Trakehner Solero RBS received 72.83%. Expected to be a top three finallist was Lisa Wilcox and her dapple grey stallion Royal Diamond. Errors in both the tempi's every three and four strides, prevented this dream story to come true. Wilcox finished fourth with 72.78% and missed out on the Siegerpreis.

The Seigerpreis of the Nurnberg Burgpokal Finals were a hot battle between Linsenhoff, Finken and Plonzke, but it was Linsenhoff and Wahajama Unicef that reigned supreme. Wahajama Unicef, an 8-year old Hanoverian mare by Warkant, excelled in her wonderful balance in all three gaits and in her correctness in the test. Scoring 90.00 points, Linsenhoff and Wahajama became the 2002 Nurnberg Burgpokal winners. Finken finished second with 88.00 points, while Plonzke was third with 75.00 points.

The Nurnberg Burgpokal is a special Prix St Georges class ran over a circuit of Germany's most important dressage competitions. Organized with a ranking and a special finals, held annually at the CDI Frankfurt, the Nurnberg Burgpokal constitutes the unofficial German Championships for Prix St Georges combinations. The horses have to be between 7 and 9 years old and are not allowed to have competed Grand Prix before. Previous winners were: