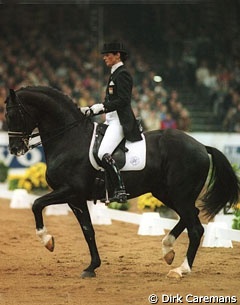 The conflict between the owners of Ferro and rider Coby van Baalen has been resolved. Although a new 'battle' in court was scheduled for December 12, 2002, the owners, Jan Lamers and Andriaan van der Goor, reached an angreement with Coby van Baalen.

For the well-being of the stallion, it has been decided that Ferro will no longer be competed. The black KWPN stallion by Ulft will devote the rest of his life solely to breeding. The vet check conducted by two independent veterinarians at the beginning of December, turned out to be negative for Ferro. A tendon injury and immense curbs on his hocks will no longer allow the stallion to be competitive in the show ring.

The agreement between Lamers, Van der Goor and Van Baalen includes that Ferro is to return to the stallion station Van Maanen in Ede, The Netherlands, and that no more judicial prosecutions will follow. The official press release also stated that no more news will be released about this issue. What the press release did not state, was that Van Baalen is most likely to receive a substantial financial compensation as she made the breeding hype round this stallion in The Netherlands and abroad possible, thanks to his successful show career under her training.