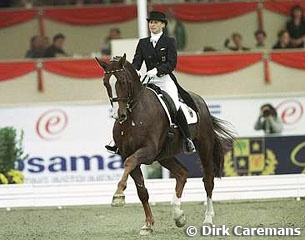 At the 2002 German Dressage Championships in Mannheim, Germany, Nadine Capellmann and Klaus Husenbeth were laurelled as the 2002 senior German champions in Grand Prix dressage.

Germany is the only country in which the national dressage championships are contested into two separate gender classes.

The female Grand Prix rider class was won by Nadine Capellmann surprisingly aboard her reserve Grand Prix horse Gracioso (by Grundstein). Nadine's number one mount Farbenfroh suffered from a severe fever attack ten days prior to the national championships and was not fit for the event. Ulla Salzgeber showed her reserve horse Wallstreet as well, as she opted to spare Rusty from the effort and get him in shape for the 2002 World Equestrian Games in September.

In the Grand Prix, Capellmann scored 1887 points aboard her 17-year old Westfalian gelding, leaving second placed Ann Kathrin Linsenhoff far behind her. Linsenhoff saddled her adorable Oldenburg gelding Renoir Unicef (by Rubinstein) and scored 1814 points. "I was very pleased with Gracioso today," Capellmann said after the Grand Prix. "I never had the feeling that anything was going to go wrong." Capellmann maintained her top shape in the Grand Prix Special and won the class with 40 points more than Linsenhoff. 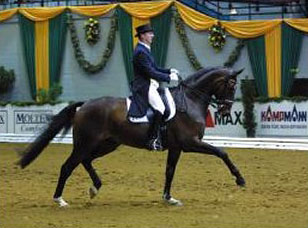 The Grand Prix kur, however, produced a different ranking. Male rider Klaus Husenbeth rode a strong freestyle aboard the Hanoverian Piccolino (by Prince Tatch xx) and received 77.20%. This not only gave him the victory in the class, but also the gold medal in the male championships and, more important, a place into the German WEG Dressage team for Jerez. Trained by Klaus Balkenhol, Capellmann finished fourth in the freestyle but accumulated the most points in the overall ranking and won again the national title.

In the Championships for female Grand Prix riders, Capellmann claimed the gold medal, Linsenhoff the silver and Werth the bronze. In the male championship, Husenbeth won his first national title, Dieter Laugks finished in silver position and Hubertus Schmidt took home the bronze.