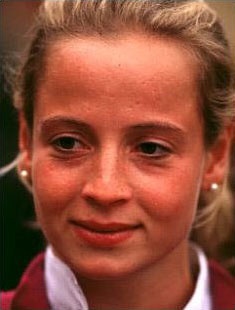 In two weeks, Werth is moving four of her horses to her new training home. The dressage diva announced this news at the CDI Hannover, Germany.

Dr Schulten-Baumer will, however, continue to train Werth and cover the distance between Rheinberg and Wedemark regulary. How often has not been decided upon. Werth is taking the 6-year old Satchmo and the 7-year old Richard Kimble to Winter Schulze. She will also continue riding the 16-year old Hanoverian Anthony FRH with whom she won the European golden team medal this year in Verden.

Werth has also quit her job as a lawyer as it became impossible to combine a competition career with law. Werth will keep up being a freelance photo model for Karstadt AG

It is said that problems between Werth and Dr Uwe Schulten-Baumer's daughter, Ellen, have stirred the arguments even more between trainer and rider. A few months ago, Ellen took over the training of the talented horses Aleppo and Agnelli from Isabell Werth.