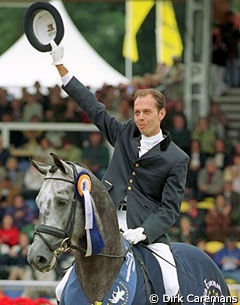 Champions in the 5-year-old class at the 2001 World Championships for Young Dressage Horses in Verden, Germany, August 8 - 12, 2001, were Hans Peter Minderhoud and Rubels.

Although Minderhoud originates from Holland, it was the German anthem that sounded in Verden as Rubels represented the Oldenburg breed.

This duo was sent to Germany as biggest gold medal hopeful for The Netherlands. Dutch equestrian magazine Hoefslag described Rubels' and Minderhoud's performance at the last Dutch Young Horse Qualifier in Kootwijk as following:

"The dapple grey stalllion is elegant and powerful in his movements. He is a beautiful appearance in the ring and gives the impression of being very rideable and workwilling. Exercises are child's play for him. He has much self-carriage and swing. It is an absolute joy to see this combination in action." 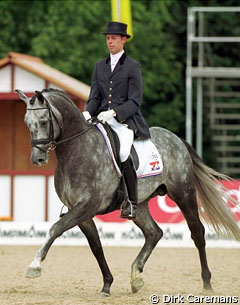 Rubels is an Oldenburg bred bred stallion by Rafurstinsels out of Klarinettels (by Amethist) but is licensed with the NRPS and KWPN studbook. Rubels was bred by Mr. Spekenbrink from Enter, The Netherlands, and is owned by Renate Landa from Kapellen, Belgium.

Despite being known for his difficult character, Rubels was the best ridden 5-year-old young horse at the World Championships. He scored 8.4 in the first qualifier which he won, and 8.8 in the finals in which he placed second. German Holga Finken was the only rider to lay a breeze of competition in Minderhoud's neck. With the Bavarian Wanesco, Finken dominated the finals with a 9.0 score but was second overall.