Introduction to the 2001 European Dressage Championships 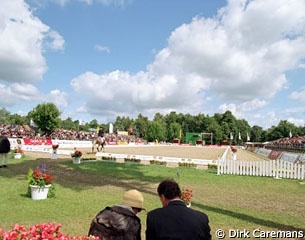 From August 8 to 12, 2001 the "Horseman´s City" Verden, which is located in the middle of the renowned Hanoverian breeding area, is again scene of an international sport event.

On this weekend three highlights of the dressage sport take place at the large Verden riding stadium. The best European dressage riders will fight for championship medals; the German professional dressage riders will compete with each other to decide on their national champion and among the young dressage horses the new World Champions will be chosen.

Verden made a name as place for the European Dressage Championship already in 1997. At that time more than 56.000 spectators followed the event. Also in this year the city will be a dignified place for the championships with its large riding stadium and race track. In the field of sport the European Dressage Championships are seen with special interest because it is the first international championship after the Olympic Games in Sydney.

The equestrian folks who come to Verden will have the pleasant experience watching dressage on highest level. Because the leading dressage nations almost come from Europe, the European championships come close to a World championship. After its success at the CDIO Aachen the German team is the major favourite for the team gold medal, but the teams from the Netherlands, Denmark and Spain are also in marvellous form. Never the top European teams were so close together. The reason why is the retirement of the two "dressage heroes" Bonfire and Gigolo in the last year on the one hand and the other hand it has to do with the fact, that there are many good trainers in Germany who brought a lot of know-how into the neighbouring countries on the other hand. The championship will start on Thursday with the first part of the nations competition (Grand Prix), followed by the second part on Friday.

The individual title will be decided in the Grand Prix Special on Saturday and in the Grand Prix freestyle on Sunday afternoon. The decision especially becomes exciting in view of the succession of the combatants Isabell Werth and Anky van Grunsven. The role of the favourite is now up to Ulla Salzgeber and Rusty, who could win among other things the World Cup Dressage Final this year. Altogether 34 nations were invited for the European Dressage Championships. Four years ago rider/horse combinations from 20 nations attended in Verden. 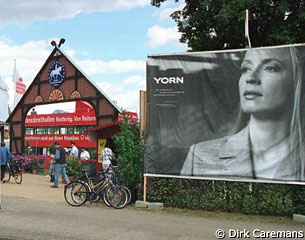 Apart from the European Dressage Championships the World Championships of Young Dressage Horses is a further equestrian highlight in Verden. In the centre of attention are the best five and six-year-old dressage horses. Especially for theses young talents the AAZ-dressage arena near the licensing triangle is transformed into a small stadium. After the both qualification tests on Friday and Saturday the representatives of the World Breeding Federation WBFSH together with experts, spectators and riders will see on Sunday, which of the outstanding horses can make the lap of honour with the desired sashes of victory around the neck.

In the past year the German Championship of Professional Dressage Riders took place for the first time in Verden. After the great success it came to an agreement to hold this year's championship in Verden again. By a Grand Prix and a Grand Prix Special the best three professionals have to qualify themselves for the final on Sunday, which includes three single competitions. First the riders present their own horses in a short Grand Prix. In the second and third part the finalists have to ride four stallions from the Hanoverian State Stud at Celle in a dressage competition on medium (2 stallions) and advanced (2 stallions) level.

The change of horses, the assignment and the start order are drawn lots prior to the final. The addition of the points of the three final tests decide on the new champion of the professional dressage riders. The professionals must prove their whole riding ability because within five minutes of preparation time they have to get ready for the different horses to present them afterwards as well as possible in the dressage arena. By the versatility of this final test the championship is a special attraction for all dressage fans who look forward to see whether the four times champion Hubertus Schmidt makes again his way at the top.

From August 8 to August 12 not only the top athletes under the horses are in the spotlight. On the occasion of the Hanoverian Foal Championship also the best foals from the Hanoverian breeding area will be presented. On Thursday, August 9, 120 foals can be admired in the AAZ-dressage arena. In front of a big audience and an international jury the final will take place on Sunday.

Already at the opening day more than 100 very talented stallions, mares and geldings will start in riding horse performance tests. The three- and four-year-old prospects with the Hanoverian brand compete for the desired tickets for the Federal Championships in Warendorf. Altogether the Hanoverian Society nominates 16 candidates for this "German Championships" on this day.

Boys and girls from five nations participate in the International Young Breeders Competition. Four German teams, which are put together in each case of three horse breeding societies, compete with the teams from Belgium, Denmark, the Netherlands and Poland for the desired golden ribbon. In this competition the young people must prove their theoretical knowledge in the fields of horse-breeding and -keeping. Beside this they have to present the horses in a proper condition on the triangle course to the judge committee. Since weeks the young people and their supervisors are in a fever of excitement to this premiere event in Verden and the spectators will observe, that it is very well with the new generation of horsemen.

The ceremonial opening act of the European Dressage Championships takes place in the town centre of Verden on Wednesday, August 8. The participating teams from many European countries will be driven in a carriage procession to the city hall. Music and entertainment build the vivid frame for the welcoming of the riders.

A special highlight will be the appearance of the great German dressage quadrille in Verden. The quadrille was founded by Felix Buerkner in the thirties. After the presentation ceremony of the medal winners in the individual competition, the great German dressage quadrille is the ending high spot of the event. Sixteen selected riders under the direction of Anton Fischer and Klaus Balkenhol will be fascinate the audience.