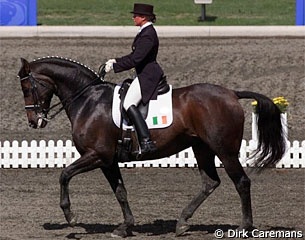 Irish Olympic dressage rider Heike Holstein has ended her six-year sponsorship contract with the Ballaseyr Stables. In consequence she loses two top mounts, Ballaseyr Royale, with whom she competed in Sydney, and Ballaseyr Legend, her 1998 World Equestrian Games mount.

Heike, daughter of international judge Gisela Holstein, has already found a new back-up in a German pharmaceutical consortium which will support her financially.

Heike's international prospect is Welt Adel, an 18.1hh 8-year-old Hanoverian by Wandervogel. Purchased as a three-year-old in Germany, Weltadel is currently shown at Prix St. Georges level and will be Grand Prix at the end of the year. "I will be competing him internationally and am aiming to take him on the Spanish Sunshine Tour," said 28-year-old Heike, who is also currently bringing on her own youngsters.