Highest Price for Weltclassiker and H.S. Europa at 2000 PSI Auction 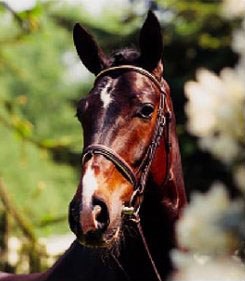 Ulli Kasselmann and Paul Schockemoele, the directors of PSI Performance Sporthorses International, were more than pleased with the results of their 2000 PSI Elite auction, held 26th November 2000.

While last year the total turnover was only a bare 5 million Deutsch Marks, this year the duo from Ankum collected 22,9 million in total. Only two jumpers were sold for less than 100,000 DM and six horses were sold for more than one million DM. The average price was 458,000 DM which shows that the PSI auction is only an extravaganza for the very few horselovers among us.

The highest price, 2,300,000 DM, was paid for the show jumping mare H.S. Europa. This Holsteiner mare by Carthago x Landgraf I won the German Show Jumping Championships for five year olds and was purchased by the German couple Gaby and Klaus Ostendorf . Markus Beerbaum will ride the bay in the future.

Sportscar fanatic Hans-Werner Aufrecht, founder of the DTM Race Car tournament in Germany, put 1,300,000 DM on the table for the four-year-old dressage star Weltclassiker. The Oldenburg bred gelding by Welt Hit II x Classiker will be the mount for daughter Eva-Maria.

Perry Thomas' Placido got sold for 1,050,000 DM to Switzerland. Placido was orginally bought at the 1997 Verden October auction by the American but the horse returned to Germany for further training under Dr Ulf Moeller. Ridden by this young-horse-master, Placido became the bronze medallist at the World Championships and the winner of the German Dressage Championships for five-year-olds. The approved breeding stallion Welt Hit VI (Oldenburg by Weltmeyer x Hill Hawk xx) found a new stable in America for 1,200,000 DM. The Hannoverian Mambo N° 5 (Metternich x Biagotti) was worthy 1,100,000 DM and will stay in Germany.