For Pleasure, Hanoverian Stallion of the Year 2000 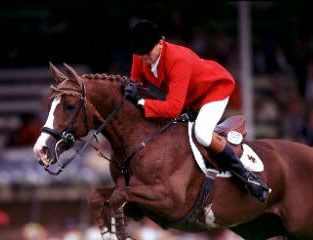 Each year after the official award ceremony of the stallion licensing in Verden, the Hanoverian Stallion of the Year is announced and laureled. For the year 2000, For Pleasure (by Furioso II x Grannus) put himself most into the spotlight according to the Hanoverian stallion commission.

With two Olympic team gold medals (Altanta and Sydney) For Pleasure is one of the most successful currently competing breeding stallions. Therefore, breeder Robert Diestel received a bronze statue with a purse of $10,000, donated by the Uelzener Insurance Agency.

Marcus Ehning, For Pleasure's rider since two years, presented the stallion during the ceremony. Also present was dam Gigantin and his two licensed sons For Feeling, owned by State Stud Celle, and For Paragon, owned by Nancy Gooding of Plum Creek Hollow Farm in Denver, CO, USA. Show Jumper Fatalis Fatum (by For Pleasure) was there too to honour his sire.

Image of For Pleasure under former rider Lars Nieberg. Copyrighted by Arnd Bronkhorst