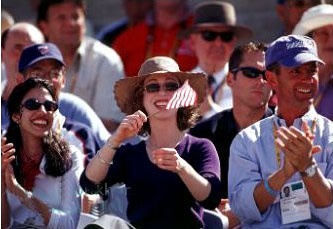 An honourable visitor sat on the benches of Horsley Park to watch the team dressage competition at the Sydney 2000 Olympic Games.

President Clinton gave his daughter Chelsea a lift to the airport in his limousine Tuesday and sent her off with a hug as she headed for Australia as a member of the official U.S. delegation to the Olympic Games in Sydney.

It was the latest in a string of increasingly visible assignments for Chelsea, 20, taking a semester off from Stanford University where she is a senior. In Sydney she will be one of 10 members of the U.S. delegation led by Health and Human Services Secretary Donna Shalala.