Strasser and Holzer to Represent Canada at the 2000 WCYH 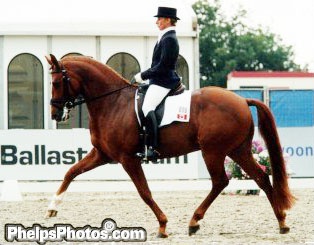 Evi Strasser & Ashley Holzer will be competing in the prestigious 2000 World Dressage Championships for Young Horses taking place June 21-25 in Arnhem, The Netherlands.

Evi will be riding her own Quantum Tyme (by Quattro out of an Argentinus mare). New York based Canadian rider Ashley Holzer will also be competing, riding a 5 year old named Devon. Devon (by Donnerhall out of a Warkant mare) was purchased from Strasser as a 3-year old.