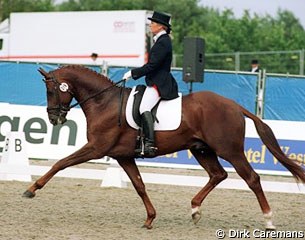 The winning horses in both the 5-year-old and 6-year-old divisions of the 2000 World Championships for Young Dressage Horses are descendants of the finest quality in Hanoverian lineage. Keystone Dimaggio and Laurentianer won their age divisions and became the 2000 Young Horse Champions.

England's entry in the five-year-old division, Keystone DiMaggio, was bred, trained and ridden by Suzanne Davies is an approved stallion by Don Primero by Donnerhall by a World Cup dam. In 1997 Keystone DiMaggio placed seventh out of 34 stallions that competed in the 100-Day Test in Neustadt-Dosse Germany. In 1999 he became the British four-year-old Champion.

Described by the judges' panel led by President Stephen Clarke as "the most beautiful and elegant picture with an airborne trot," the winning horse in a field of 38 starters achieved the highest honor for young performance horses recognized by The World Breed Federation.

Owned by Suzanne Davies and Darren Mattia, plans for the horse's future are to keep the stallion in Great Britain. Davies also had another horse in the final of the division, the Hanoverian stallion, Keystone Waterford, by Weltmeyer, ridden by Carl Hester, who finished seventh.

Such a win for Great Britain represents the goals of the competition, which brings together the top young horses in participating countries. Such representation will help to develop the breeding programs within those countries as the program develops. 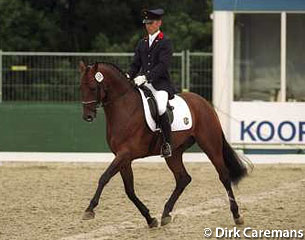 In the six-year-old division the Hanoverian stallion Laurentianer, by Lauries Crusador XX out of a Grande dam, had "absolute excellent self carriage" as described by Mr. Weber Stefan president of the judges' panel for the division.

Riding in the uniform of the Warendorf stallion station, Farnwick is a profession trainer for the "Landgestuet" and trains with Johann Hinneman. Laurentianer has won in every show he has competed in so far, including the qualification test for the German Federal Championship which will be held this September in Warendorf.