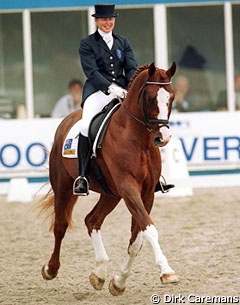 With the Belgian warmblood Rituel she captures victory after victory, throwing high notes above 70%. At the 2000 Diana Ferrari Australian Dressage Championships the pair won the Rod Barker Memorial Cup as they were able to gather the highest score of the event, 70.56%.  "It is really nice to win an Elementary Championship on him. It is the first time I've won a National Championship that's not at FEI level," Hanna told.

Rituel, by Weltmeyer II out of Erika (by Wendekreis) was bred by Dirk Goovaerts from the Campine area in Belgium. Through the brokerage of Stefan van Ingelgem, he was exported to Australia as a foal but already came into Hanna's possession when he was a five week old colt. Rituel is a stallion approved for the Australian warmblood horse association. Many stallions have to deal with the combination of breeding and showing, even Rituel. "I was really careful to take him to a lot of shows before we started to serve. As it turned out, now he is serving, he is just a lamb, and we could probably hand serve millions of mares, and it wouldn't worry him, but I don't want to do that because of the physical problems you get with breeding stallions - so I'll stick with the frozen semen. Mentally it is no problem at all," Hanna says.

Momentarily Rituel is being prepared for FEI level and although he only turns six in 2000 he already knows many FEI tricks.  "He can already do lots of more advanced work, you aren't allowed to call the tricks. I keep thinking, how am I going to get to the next stage, then all of a sudden something falls into place, and it all starts happening. I'm pretty confident he'll go Grand Prix." And that's how Rituel's future looks like.