Rider in the Spotlight: Evi Strasser, Having the "Tyme" of her Life 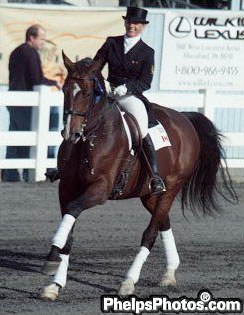 It is hard to find a famous rider or literary figure which resembles or illustrates Evi Strasser in a way. The 36-year-old native German is a remarkable person on the international dressage and horse dealing scene.

Approximately 1.60 meters high, Evi Strasser « stands out » in the crowd by her swift way of talking, her nervous appearance and her dominant presence in a conversation. As a busy horse dealer and competition rider, Strasser is very difficult to pin down for a amiable chat. Nevertheless, she loves to talk about her horses which she cherishes with all her heart. If her ambition were to be realised in achievement or performance, than every single one of her own 6 horses would became the new Olympic champion.

Although Strasser competed in the Olympic Games of Atlanta in 1996, her status as a competition rider received a considered reboost in Europe when she finished fourth at the World Championships for Young Dressage Horses in Arnhem last June. On the Oldenburger Quantum Tyme, Evi made a very strong impression as the Canadian outsider. Even more, because it was Canada's first time to enter a championship of this kind. As sole Canadian participant, Strasser was a pioneer for her country. But, the journey from Canada to Europe for the show was only one of her many annual trips to Europe.

Born with the 'horse vibes' running through veins, Strasser has her roots in Inzell, Bavaria. At the age of 3 she started riding her neighbour's pony and at age 6 she climbed on of her first big warmblood horse. Her parents offered her first riding lessons at the Riding School of Ruhpolding 20 minutes from home. « My biggest influence in my riding career was Herr Maier, I trained with him once a week, » she said. Strasser was 11 then. Her equestrian career took an enormous jump, when Strasser discovered the flamboyant but temperamental Hanoverian mare Lavinia (by Ludendorff). 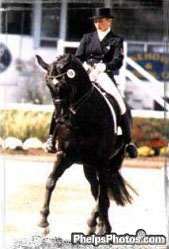 Not only did Lavinia open new perspectives in her career, but Strasser herself also made a decisive choice in her life in the period that she found the black mare. In 1988, Evi decided to say adieu to Germany and move to Canada. In her new home country Strasser got employed in the Knight and Dawn Stables in Quebec. Her job was to detect good European horses and import, break, train and show them. Knight of Oldenburg, Dawn of Oldenburg and Zoice of Oldenburg were the three mounts which gave her a name on the Canadian show scene.

Lavinia joined Strasser to Canada in 1988 but was meant for a friend. Instead, Evi ended up buying her for herself. Winning various Grand Prix tests at North American CDI shows, the duo became a member of the Canadian Equestrian Team in 1994. They represented their country - after Strasser took on the Canadian nationality -- at the first World Cup Finals in Los Angeles in 1995. Highlight of their career as a pair was the selection for the Canadian team for the 1996 Olympic Games in Atlanta. With the team Strasser finished tenth and individually 45th. Lavinia was a difficult mare to ride but Strasser knew which strings to pull. Their last show year together ended with an entry in the World Cup Finals of 's Hertogenbosch in 1997.

Meanwhile, in 1994, Strasser had met the Hollywood TV-producer Murray Shostak whom she married and founded Good Tyme Stables with in St Adèle, Quebec, near Montreal. Her barn would be her home base for training and selling horses. « We always have 5 to 10 horses for sale in the barn. I buy most horses at the age of 2 ½ and train them to Grand Prix myself, » Strasser explained. A perfect example of her working system is the Oldenburg gelding Show Tyme. Bred by Mr. Kotschofsky in Germany, Evi imported the bay as a youngster and prepared him for Grand Prix. After a last striking performance under Strasser at the CDI Windedge in 1998, Show Tyme (by Landadel x Freiherr), got sold to Kristy Oatley-Nist. 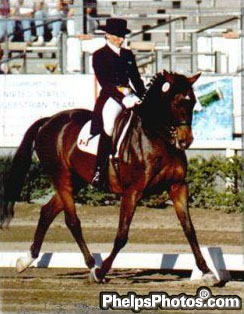 The Japanese number one dressage rider, Meiko Yagi, purchased the 10-year-old Taiso Aurel in 1998 and qualified him for the Sydney Games. Until 1998, Taiso Aurel was known as Aurel Tyme, an Oldenburg bred by C. Hueppe, who enabled Strasser to compete at a series of CDI's in Canada, the USA and Germany. Aurel Tyme (Aurel x Waidwerk) gave Strasser the opportunity to be put on both the CET (Canadian Equestrian Federation) long and short list.

The diversity and flexibility of Good Tyme Stables is exemplified by the horse Tyme Square. While Strasser's passion lies with dressage, her keen eye is also able to spot show jumping talent. Regina Dircks bred Tyme Square in 1989 out of a Lanadel x Fröhlich lineage. Although owned by Evi, it is the German Fritz Ferver who is riding the licensed Oldenburg for the German Show Jumping Team. Tyme Square won the Grand Prix in Norten-Hardenberg and participated in the nation's cups in Spain and Portugal. In his last tournament, the Warsteiner Champions Trophy 2000, the stallion ranked 2nd behind Franke Sloothaak's Paramo K.

« What I am most proud of is that I brought Justin Tyme and Pryme Tyme to Grand Prix myself. I had them from three years on, when they were very green. I chose them alone and everything turned out so well, » Strasser happily exclaims. For Evi Strasser, the present is dominated by a collection of six outstanding horses of which five are Oldenburgers. Highflyers of the team are Justin Tyme, an 8-year-old chestnut gelding by Argentinus, and Pryme Tyme, a 9-year-old gelding by Aletto x Troublemaker xx . « Pryme Tyme, my current Grand Prix horse, is such a spectacular mover and he has won every class I've entered him in. » Justin Tyme is doing his first year Grand Prix and Evi has set her sights on the World Cup Finals in Toronto. At the CDI Blainville, June 2000, the combination won the Advanced level class with 71.50% and in the Swarovski Canadian League World Cup Final at the Royal Horse Show they became third. 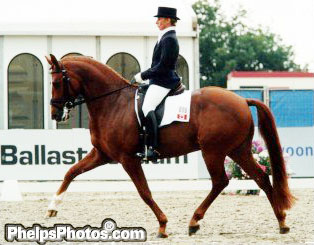 The small but splashingly moving Quantum Tyme gave Evi Strasser a new face on the European scene. With a fourth place at the World Championships, the interest to buy Quantum boomed. « I'm not selling him, unless it's for an extravagant amount of money, » Evi said behind the scenes. The cute little chestnut is Evi's favourite horse to work with. « He's so smart. He learns so fast that I better don't ride him every day, » she joked. « He's such a toy ; he plays with the changes, the piaffe and passage. » Evi bought Quantum Tyme off a picture of the Vechta auction catalogue. « He is by Quattro B x Argentinus and that's my favourite bloodline,» she confesses.

In the shadow of Quantum, there is Quality Tyme, a bay Oldenburger gelding by Quattro B x Pik Bube I. Quality is bigger than Quantum and has very elastique movements. « Quality is always standing a little in the shadow of Quantum but you should see him. He's stronger, is a super mover and the piaffe and passagge give him no stress at all. » The 6-year-old Westfalian Wodka Tyme, a Weinberg x Paradox, reminds Strasser of Lavinia. « Wodka is such an electric horse. He's a great mover but easier than Lavinia. » Last but not least, Evi mentions Any Tyme, a licensed 4-year-old by Acord II x Landadel x Fredericus. « With him, I'll be trying for the FEI 5-year-old class and hopefully the World Championships. He has such great nerves and is actually even better than Quantum. »

The equestrian business is known to be a tough one, a dog-eat-dog world, but Evi Strasser seems to be having the « tyme » of her life. Even though her busy schedule as a teacher, clinician and horse dealer is often fatiguing, Evi does have the time to enjoy her six-some of talented dressage horses. With a supportive husband, a cherry of daughter and her Oldenburgs, she can hardly wish for more in life.