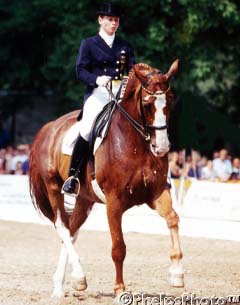 Aleppo-S-Old is the name of Isabell Werth's newest hit. The Oldenburger chestnut by Argentinus out of a Figaro daughter appears to be an nice Grand Prix prospect for the future.

Still inexperienced in his tests, Aleppo S does not always put Isabelle first, "I was very satisfied with his progress this weekend" she remarked after the Grand Prix Special. At the Parkfestival Dressur in Bad Honnef, July 9-11th Werth ranked third with this mount in the Grand Prix closely following Ulla Salzgeber and Rudolf Zeilinger .

Co-owned by Dr. Uwe Schulten-Baumer and sponsored by the Fördervereins des Sports auf Oldenburger Pferde (Promotion society of Oldenburger Sporthorses) Aleppo S possesses all the talent to become an excellent Grand Prix horse. With three very powerful and solid basic gaits and a load of Grand Prix potential he might become Werth's new number one horse.