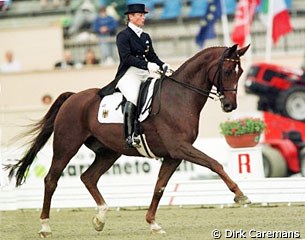 Nissan Gigolo FRH injured his leg during the warm up. While leaping in the air, the 15 year old gelding hit his front leg right on an old injury and went lame immediately.

Isabell Werth announced that she wouldn't be able to enter him in further Aachen tests, nor will the injury be healed in time for the European Championships in Arnhem in two weeks. Sceptics claim that the career of Gigolo is completely over. The wonderful Hanoverian made a life sum of 750.000 DM. German chef d'equipe Klaus Balkenhol announced his German team which consists of Isabell Werth with Anthony, Nadine Capellman with Gracioso, Alexandra Simons de Ridder with Chacomo and Ulla Salzgeber with Rusty.

Image of Isabell Werth and Gigolo copyrighted by Dirk Caremans