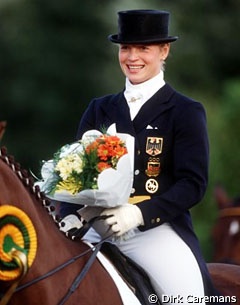 This succes will spare Gigolo from the next trial at the German Dressage Championships in Verden. Isabell will there present her Hannoverian gelding Anthony FRH (by Argument/Trak).

Nadine Capellmann-Biffar entered a sole rider two Grand Prix horses in Bad Salzuflen. The inexperienced Farbenfroh (Westfalian by Freudentanzer) moved with great impression through the ring and settled himself on a second position in the Grand Prix; with Gracioso she came in second in the Speciale and Kur (78.87%).

Ulla Salzgeber and Rusty made a hesitating start in the Grand Prix (6th), but moved to place 3 in the other two tests. This achievement will probably secure her of a place in the German dressage team.

Keep updated with the selection procedures of each country for the 1999 European Championships, which will be covered live by Junior Riders and Horsesdaily.