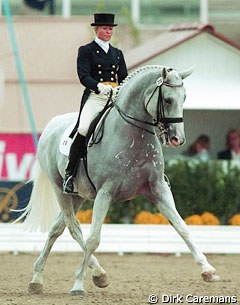 Margit Otto-Crepin recently decided to put an end at the wonderful sport career of Lucky Lord. The seventeen year old Zweibrucken gelding by Lord completed his last show at the CDI Stuttgart

where he captured a six place in the Grand Prix freestyle placing right after the top German combinations.

When Lucky Lord was twelve the Forst family offered him to the French Otto-Crepin who made a powerful bond with the impressive gelding in a short five years. At the 1995 European Championships in Mondorf Les Bains, Otto-Crepin and Lucky Lord received the bronze team medal.

One year later she came in second in the World Cup finals and at the Olympic Games of Atlanta the combination settled on a seventh individual place.

Lucky Lord can now rest at his barn in Lippental in the compagny of Corlandus. Margit Otto-Crepin, currently president of The International Dressage Riders Club, will remain competing the Holsteiner stallion Loutano (Landgraf I x Calypso I).