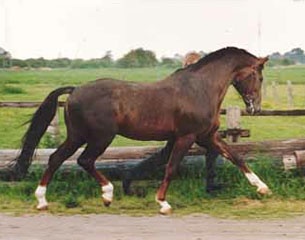 As chairman of the "Official Auctions of Belgian Sport Horses and Foals Corporation", Dirk Zagers is a respected person in the auction environment because of his extensive knowledge on bloodlines.

Besides organizing the annual BWP Winter auction, Dirk contributes a part of his time on examining bloodlines for the WBFSH. In the Breeding Guide of 1998 he wrote the following excerpt on Wenzel

Last year Wenzel I by Woerman was still teetering on the brink of the top ten, but for 1998 he is the absolute number one in the dressage rankings. With three progeny, Wenzel I has gained 2,149 points, to which the greatest contribution was made by LRF Walk On Top. One notable fact is that all Wenzel I's gets are out of an Absatz dam. This applies both to the annual ranking list as to the all-time best rankings. The phenomenon is also apparent in breeding stallions. Nine out of 24 approved stallions by Wenzel I are out of dams descended from Absatz.

Yet we cannot say that Wenzel owes his number one position to Absatz' influence. The powerful dam lines which many performing descendants carry, are of great importance to Wenzel's top position. Louise Nathorst's Walk on Top and Christine Mary Doan's Welfin are from the same line. Other successful descendants with Wenzel in their line are Isabell Werth's beautiful Trakehner x Hanoverian. Sired by the gorgeous black Argument/T out a Wenzel I dam, Anthony FRH covered the 26th place in the dressage horse rankings of 1998. His full sister gave birth to the approved Davignon I son, De Niros, who placed fourth in the Stallion Performance Test of Verden. Wenzel I's approved son Western Star became an important sire with his Olympic bronze medal winning son Jonggor's Weyden.