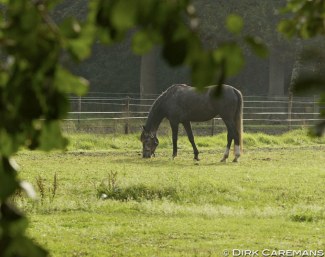 Most domestic horses in the UK are grazed on pasture that has been cultivated for production animals which have contrasting energy requirements to horses. Health issues such as obesity or laminitis can develop due to excessive access to lush grass, therefore horses may require their grazing restricted.

Researchers Cameron, Horseman, Knowles, of Hockenhull of the  Animal Welfare and Behaviour Group at Bristol Veterinary School investigated what methods are used to limit horses grazing in the UK and what horse carers' opinions on these are.

Common methods of restricting grazing include muzzling, stabling, strip grazing and ‘starvation’ paddocks. Little research exists on the welfare implications of these methods or their efficacy at managing health issues.

This preliminary study investigated the use of restricted grazing practices in the UK and horse carers’ opinions on these methods. An online questionnaire, approved by Bristol University Human Ethics Committee, was distributed on relevant equine social media groups and pages, and via email to equine colleges and riding schools resulting in 503 responses.

Respondent perception of welfare impact differed significantly between methods (P<0.01) with strip grazing considered to have the least negative impact on welfare and stabling the most. Perceived welfare impact was not associated with the methods respondents used, suggesting owners may not always be able to use their preferred method. Indeed, 24.0% of respondents reported that yard restrictions determined how they managed their horses.

Ease of implementation influenced the initial decision of which method to use for 52.3% of respondents. Despite scoring low for perceived welfare muzzles may be commonly used to restrict grazing as they are easily implemented, whereas yard/arena turnout may be preferred but unavailable for many owners.

How effective owners rated each method was significantly associated with the reason it was used (P<0.01), e.g. 17.2% found strip grazing effective in preventing laminitis, 28.8% for weight management, but only 12.8% for managing a metabolic disorder. Further research is required to establish whether scientific evidence supports owner-reported effectiveness of restricted grazing methods for different conditions, so the best advice can be made available.

Owners restrict their horses’ grazing so that they are healthy and can remain in use (unless retired), while maintaining a good quality of life. However, restricted grazing methods can potentially impact quality of life in other ways. Horse carers have conflicting opinions and experiences of which methods are best; the next stage of this project will use semi-structured interviews to explore these further.

Related Links
Hormonal Disorders Responsible for 90% of Laminitis Cases
Laminitis: A Serious Threat to your Horse with the Potential to Cripple and Kill
Shedding Light on Cushing's Disease and Laminitis
Owners of Cushing Horses Unite Online in Discussion Group