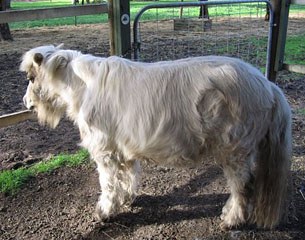 In response to my research article on cushings disease and laminitis, I was contacted by a Eurodressage reader who put me in touch with Dr. Kellon VMD, a well known US veterinarian who formed an online group for Pituitary Pars Intermedia Disease and Insulin Resistance. A graduate of the University of Pennsylvania School of Veterinary Medicine, Dr Kellon founded the "ECIR online group" to provide accurate and up to date information on PPID/IR and create a forum where owners can share their experiences.

"We have almost 11,000 members, including owners, vets, researchers, and other professionals," she told Eurodressage.

Group member Susi Gordon MD, says for her the group has been a huge support in helping her cope with and manage the loss of her mare from PPID, and knows that the work Dr Kellon is doing will go a long away to help prevent other horses from suffering the disease. "The group has been in existence since 1999 and now has 10,839 members worldwide," Gordon explained.

Dr. Kellon's goal is to provide first line information to owners of equines with the above noted syndromes and to assist these owners and their veterinarians in providing recommendations for the diagnosis and treatment of PPID/IR.   While members can contact Dr. Kellon for private, paid consultations, the online group provides a free membership and free infos to its members.

As an example of the 'cutting edge' info provided at Dr. Kellon's ECIR group,  the Dexamethasone Suppression Test is no longer recommended as the first line test of choice.  According to Dr Kellon many of the horses tested are harboring a smoldering laminitis and this test can push the horses over the edge into a full blown acute laminitis attack.  "I know only too well the results of this test as I lived it first hand with one of my most promising dressage mares," says Susi.

As an active moderator and member of this group, Dr Kellon is also co-owner and co-founder of the ECIR group. She has opened the group up for anyone who wants to learn more about PPID and gain knowledge into how to better protect their horse. "PPID is a disease of aging. It is caused by damage to dopaminergic neurons, following cumulative exposure to free radicals. It's not fatal. Properly treated horses live many, many years and die of other causes," said Dr. Kellon.

With two types of tests currently used to detect PPID, Dr Kellon advises that there may be hidden dangers to certain types of testing. "The Dex Suppression test monitors the level of Dexamethasone, which is normally used to suppress the release of ACTH and cortisol in the bloodstream," she said. "With PPID, the pituitary is basically on "autopilot" and does not suppress. The Serum ACTH test on the other hand, tests the blood level of ACTH, a pituitary hormone."

While the dexamethasone can trigger laminitis in PPID/IR horses, Dr Kellon stated that some people believe it is a more sensitive test, but advises that there is no good proof of that.  "However, there are limits to both tests and the ACTH test samples also come with special handling requirements."

Adding another complication to test procedures, ACTH levels have a  "seasonal rise"  that may also affect the diagnosis. "It's a natural rise that occurs late summer and fall. The upper end of normal needs to be adjusted to avoid a false positive diagnosis at those times," she added.

In addition, horses that are diagnosed with PPID will also eventually encounter Insulin Resistance, which is the failure of muscle and fat cells to respond normally to insulin. "If PPID is well controlled, IR will eventually occur in any horse with PPID, and IR is effectively diagnosed through blood insulin, glucose and leptin testing."

With a number of outward clinical symptoms of IR, Morgans, Arabians, Peruvian Pasos and other Spanish and gated breeds, mustangs, minis, pony breeds, donkeys/mules, as well as some Saddlebreds, are more prone to the disease than others. "At the onset of IR, fatty crest or fat deposits can form over the horses eyes, and the horse may be overweight in general," she stated. "A fatty sheath may appear in geldings, and mares may have abnormal cycling."

As IR is a genetic tendency, not caused by anything you can ward off, the only thing horse owners can do is to enforce good diet control, which will then help their horse stay healthy and free of laminitis.  While the herb Vitex Agnus-castus (Chastetree berry) has been used in the treatment of PPID,  according to Dr Kellon this controls symptoms for a while, but not the hormone levels and the disease can still get out of control. "Capsules or tablet forms of pergolide are the most stable way to use this as treatment of PPID, as powders and liquids lose potency rapidly," she said. "Pergolide can be purchased in pharmacies, but the  Prascend brand from veterinarians has a better shelf life, although is much more expensive."

For more information or to join the ECIR group go to  http://pets.groups.yahoo.com/group/equinecushings