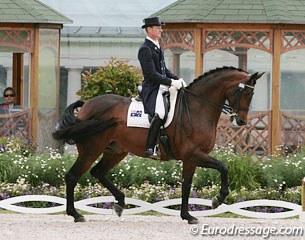 Most popularly known as Equine Cushing's Syndrome, Pituitary Pars Intermedia Dysfunction (PPID) has been noted to be present in approximately 15-30% of the equine population with an increased prevalence (up to 76%) in the older horse population.

"Cushings disease is dangerous and if not picked up in early stages can be fatal, not from the disease itself but from conditions such as laminitis or colic," says Australian dressage rider Brett Parbery who had to euthanize his most successful Grand Prix horse to date, Victory Salute, due to PPID. "The vet that treated my horse, after he contracted the disease, was hopeless as PPID was part of the problem. However we didn't realise this until it was too late."

Made aware of the presence of PPID once his horse has developed severe laminitis, Brett realises now the deadly affects of Cushing's disease  and the lack of information horse people have about it.

"When we realised that Victory Salute (Sam) had Cushings disease it had advanced so far that the intestinal wall had deteriorated enough to allow some very dangerous bacteria, that sit in the hind gut, to get into his system, causing a laminitic episode," Brett explained. "Cushing's disease is more common than it is given credit for and is often brought about by stressful conditions such as travel and excess exposure to high adrenalin environments, both of which we do a lot of."

The Hormonal Background of Cushing's Disease

To explain this silent killer, Dr Tom Schell DMV says the condition is based on hormone secretion, but that one really has to understand basic anatomy of all mammals to understand the disease. 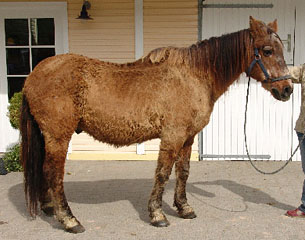 Under normal conditions, the pituitary gland is controlled or regulated by the hypothalamus and dopamine secretion. However in cases of PPID, there is a decrease in the dopamine input to the pituitary region, but the response to dopamine by the tissue is intact.   The end result is therefore an over-functioning of the pituitary gland, resulting in over production of ACTH. This then results in over stimulation of the adrenal glands and thus excess cortisol secretion.

It leads to adrenal thickening (hyperplasia) with excess release of cortisol but Dr. Schell says this is not a consistent finding in all horses, nor is an elevated cortisol level, but the over-stimulation of the glands is what can be the cause of many other problems. To Diagnose PPID takes a great deal of effort and must include a combination of clinical signs, history and laboratory testing.

Thus other tests must be carried out to draw any conclusions. Tests such as:

Knowing all too well the devastating consequences of the disease, Brett realises now that if had he known more about PPID they may have been able to save his horse's life. "Helping Victory Salute fight laminitis was by far and away the worst thing that I have ever had to deal with in my life.  He was such a special horse in so many ways, not only in the dressage arena," Brett said frankly. "Firstly, he was a giant.  At 18 hh and 700kg, he was very big, but so tender and sweet.  He could have been 12 hh and not have been more gentle and respectful for those around him. Secondly, he allowed me to transport him all over the world, and take him into places that are not of any comfort to a horse.  Strange trucks, strange stables, strange arenas full of people.  The trust that this horse had in me was the foundation of the close bond that we formed together. He allowed me to control his body in such a way that he always moved far better under saddle than he did by nature.  He hardly ever complained about anything, and when he did have a problem, it was usually food related."

Just risen to the point they had been working for all those years, Victory Salute started to get sick and Brett now wishes his vets could have concluded the cause of the sickness much earlier. "Then we would have had a chance to save him.  Hindsight is a wonderful thing," he stated While Sam was struggling to fight the laminitis, Brett was on the phone and computer searching for alternative ways to help him with his battle.

"It was exhausting and emotionally shattering," Parbery admitted. "It was the feeling of helplessness that played on my mind the most, even to this day.  To not be able to help my best friend who had given me so much of himself, who had catapulted me to international success.  Why couldn’t I help him? I guess that I get a little bit too close to my horses, but in my philosophy of why I do it, that is what makes it meaningful to me.  He is buried between our stables and our indoor arena and I ride past him every day.  I say the same words to myself every time I ride past. 'I love you Sam'. I don’t think I will ever fully recover from his death."

Unable to save his best friend, Brett hopes that more people will become aware of the disease to prevent such devastation in the future. And if caught early, there is much that can be done to treat a horse carrying the disease.

"The most common medication used to control or manage the condition of PPID in horses is Pergolide, which is a dopamine receptor agonist and results in increased levels of dopamine as well as stimulation of the dopamine D-2 receptor, resulting in ideally lower ACTH levels being secreted by the pituitary," said Dr Schell. "This decreases stimulation of the adrenal glands and hopefully lower overall cortisol levels."

The success of the medication is then based on improvement in the clinical signs, as well as monitoring of blood ACTH levels, or repeat dexamethasone suppression testing.

Other factors to consider in PPID, according to Dr Schell, include:

While Cushing’s disease is not really a disease that is thought to be preventable by standard viewpoints, Dr Schell personally believes that nutrition and prevention/control of excess inflammation and oxidative stress will go a long way in preserving health. It is a secondary method of control of clinical signs, along with Pergolide therapy if indicated.

"I feel that many horses live a very stressful lifestyle due to competition, housing, trailering and poor nutrition that contribute to the excess release of cortisol into the bloodstream.  I think or believe that the use of antioxidants in combination along with other anti-inflammatory herbal preparations may go a long way in terms of decreasing the negative effects that cortisol could have on body tissue, including the development of laminitis," said Dr. Schell. 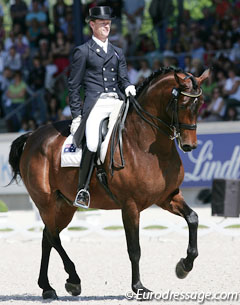 Important to highlight though that this disease, by true nature of definition, is more common in older horses, Dr Schell says it is unfortunate that it is being diagnosed and treated in so many younger horses.

"The question, in my mind, is whether these diagnosed younger horses are truly PPID patients or are they merely secreting higher levels of cortisol into the bloodstream as a result of stress and lifestyle factors, complicated with improper nutrition?"

As for the question as to whether the disease is fatal, Dr. Schell replied: "I believe that if the disease is not controlled properly, then various health conditions such as laminitis might become severe enough to render euthanasia.  I honestly believe that this disease is being ‘over-diagnosed’ in today’s equine athlete population, when in fact what we are seeing is a manifestation of uncontrolled inflammation as a result of lifestyle factors. I feel that the pergolide, even in a pseudo-PPID horse may improve clinical signs as it helps to regulate the pituitary gland indirectly, which may counteract the effects of stress to a degree."

Dr. Schell thinks the biggest issue is that many of these horses are not responding fully to the pergolide because either they are not true PPID horses or the secondary inflammation/oxidative stress is not being managed properly. "The biggest clue to this, in my eyes, is the occurrence of insulin resistance in these patients, which has been associated with chronic inflammation/oxidative stress in human studies," he said.

Certain of the disease's fatality, Brett knows that knowledge is power and hopefully if people are better informed about the condition the various consequences of its presence will exist no more.