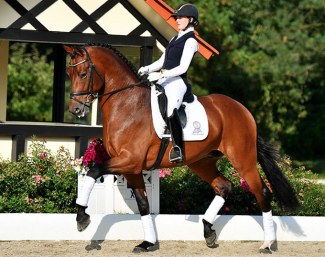 The 2019 PSI Auction, hosted by Paul Schockemöhle and Ullrich Kasselmann, celebrated its 40th anniversary on Sunday 8 December 2019 and became a gigantic success.

The top seller of the 2019 PSI auction was the 4-year old stallion V-Plus Gold (by Vivaldi x Furst Romancier), which Grand Ducal Dressage from Luxembourg acquired for 1.3 million euro. The Luxembourg dressage company has purchased at PSI before (Ferrari, Quel Filou).  V-Plus Gold is the full brother to V-Plus, which sold last year to Harmony Sport Horses in the U.S.A. for 1.2 million.  Frederic Wandres will continue to ride this exceptional stallion with the goal of qualifying for the World Championships for young dressage horses.

V-Plus Gold was also one the personal highlights for P.S.I. founder Ulli Kasselmann. “I know all the horses very well, but V-Plus Gold in particular has developed enormously over the past few months and is now going into the best of hands. They have been great friends of the P.S.I. and have also given us the opportunity to continue his further training and preparation for the big sport.”

The 2019 Bundeschampion in the 3-year old mares and geldings class, Saniola (by San Amour), sold for 700,000 euro. She was bought by a Swiss jumping horse owner who is venturing into dressage.

The Oldenburg licensed stallion For Romance II (by Furst Romancier x Sir Donnerhall) sold for 700,000 euro. Michelle Filsinger, an American client of U.S. Grand Prix rider Jennifer Hoffmann, purchased the stallion, but will keep him at Hof Kasselmann in Germany for the moment.

Prices for the dressage horses were:

The founders of the famous P.S.I. brand can be proud of their achievements tonight, Paul Schockemöhle commented, “The horses are getting better and better, prices have changed, the sport is evolving and we have to keep up with the times. But looking back at how the P.S.I. Auction has progressed, I think we have achieved that!”