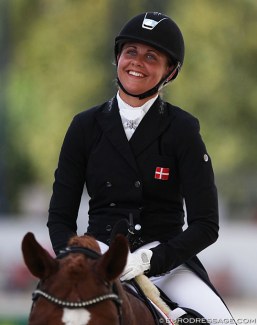 The 21-year old Victoria has been riding as a professional at Helgstrand Dressage since her father Soren moved his business there in 2017.

Victoria has now decided to return to an academic career, at least part time, by beginnig studies Business and Economics at Aarhus college, while riding for Dennis Fisker at his yard at Kirstineholm outside Aarhus.

"With Victoria as a rider, we have better opportunities to take several good horses into training, just as she can also take over the daily training of my horses when I am traveling as a team coach," Fisker told Ridehesten.

Victoria's move to Aarhus entails that she loses the ride on her number one competition horse of two years, the chestnut stallion Ludwig der Sonnenkonig.