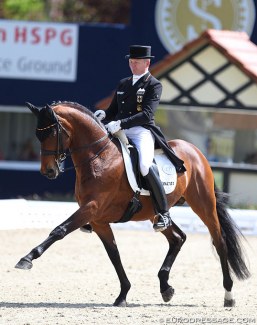 The owners decided that Imperio's Grand Prix days are ver and that the 16-year old will now continue as a schoolmaster with Schmidt's student Annabelle Steffens.

Imperio is bred by Hartmut Keunecke from Strasbourg and  is by Connory x Balfour xx. He is owned by the syndicate of the Schwaiganger state stud, the German Olympic Equestrian Committee (DOKR) and Schmidt.

He became the reserve Trakehner licensing champion as a 2,5 year old in 2005. Under Anna Sophie Fiebelkorn he was the 2008 Bundeschampion and won silver at the 2009 World Young Horse Championships. The stallion moved into training with Hubertus Schmidt in 2010 who to take him to Grand Prix.

Imperio missed out on two major championships due to injuries: the 2011 Nurnberger Burgpokal finals and the 2013 Louisdor Cup Finals. However in 2014 Imperio was submitted to the German squad and his peak year was in 2016 when the stallion was named the team reserve horse for the Olympic Games in Rio.

In 2018 Schmidt and Imperio competed at the CDI's in Dortmund, Hagen, Wiesbaden, Oldenburg and Frankfurt; the latter being the pair's final competition together.

The Bad Homburg based Annabelle Steffens has now taken over the ride and is thrilled with the opportunity.

"When I sit on Impi, it feels like floating. He truly is a dancer. I can't describe the feeling any other way," Steffens told Eurodressage.

Steffens has not yet competed at a CDI in her career. The past two years she has competed at national L/M-level with three horses: Rex Gildo (by Rosario x Classiker), Sauvignon (by Sandro Hit x Rubignon), and Woody Allen (by Weltissimo x Donnerhall).

Steffens has tactically avoided a daily 220-km commute from her home to Schmidt's yard in Paderborn by getting accommodation there.

"Since a short while I have an apartment there so the commute is not a problem," said Annabelle. "Otherwise my family and I are taking the train or the motorway from Frankfurt to Paderborn more than ever before," she added jokingly.

Steffens has all her horses in training with Schmidt and is now taking her time to become a combination with Imperio. Show plans are not yet on the agenda.

"We haven't made any concrete plans yet about shows. At the moment we most importantly concentrate on the training," she said.