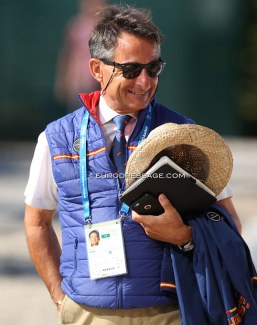 Luis Lucio has decided to retire as the Technical Director for Dressage for the Spanish Equestrian Federation (RFHE).

His contract was up for renegotiation at the RFHE General Assembly in December, but on 30 November 2018 Lucio indicated to the RFHE that he wants to retire and commit to his private practice again.

Lucio was the RFHE's Technical Dressage Director for six years. Last year his position came in stormy weather in 2017 after controversial team selections for the World Young Horse Championships and European Championships.

The federation will immediately open up the selection process to find a new director for the Dressage Department for the years 2019 and 2020 with the Tokyo Olympic Games as main goal.

Lucio was also a member of the FEI Dressage Committee, but his term ended this year. He was replaced by Irina Maknami.