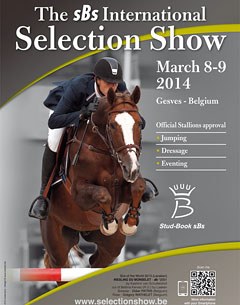 Eight dressage colts have been registered to participate in the 2014 SBS Stallion Licensing, which takes place in Gesves, Belgium, on 8 - 9 March 2014.

The Royal Belgian Sports Horse Society studbook is a small branch of warmblood sport horse breeding in Belgium, but the studbook has gained much popularity amongst breeders who feel shunned by the Belgian warmblood society (BWP) or who aim to obtain an easier licensing status for their stallions than with other studbooks.

Interestingly Dr. House was also approved at the 2012 Licensing but is re-entered for the 2014 licensing