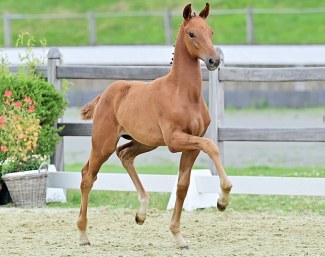 The charming filly Victoria Woods (by Vivaldos - Bretton Woods - Sir Donnerhall I), bred by Johann Martens was the price highlight, selling for 36,500 euro to The Netherlands. Her sire Vivaldos was the celebrated Oldenburg main premium winner. Dam Sonnenwolke already produced a high-priced quartet of elite foals for Vechta, among them record foal Diamond Starlet (by Diamond Hit) and is the sister of the celebrated stallion Dante's Junior (by Dante Weltino OLD).

The second top price and most expensive show jumper was Cherry Lady (by Cornet Obolensky - Caretino - Landlord), bred by Jochen Willen. She sold for 21,000 euro to the U.S.A.. Her dam Tanne II is the sister of the licensed Cooper van de Heffinck/1.60 m with Olivier Philippaerts, BEL, Cezaro by Cantus, Caesar van de Helle by Cantus, and the 1.60 m successful Quinault by Quidam de Revel/Noora Forsten, FIN.

On 1 and 2 October our 95th Fall Elite Auction will take place live at the Oldenburg Horse Centre in Vechta. In the collection you will find selected Elite foals, dressage horses that have been successful up to Intermediaire I level as well as jumpers that have been successful in the show jumping ring, including the sister and cousin of the European Team Vice Champion Stargold under Marcus Ehning. You can find the collection from Monday, 6 September, at www.oldenburger-auction.com.