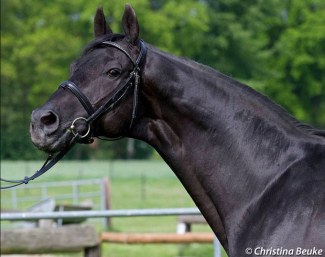 The Thoroughbred stallion Likoto xx has been put to sleep at the age of 26.

The black Likoto xx was born in 1993 at Gestut Fährhof in Germany.

He was by Fit to Fight xx (a grandson of Bold Ruler) out of Like a Leaper xx (by Lyphard's Wish xx x Micky McGuire xx).

He was discovered by Werner Schockemöhle and the stallion started his career as a racer and won four times, earning 42,300 euro in prize money. He also won the 4-year-old stallions class at the Thoroughbred Stallion Show in Cologne in 1997.

Likoto xx then moved to the Celle State Stud in the North of Germany after Werner Schockemöhle's death and stood at stud the rest of his life.

He was approved for Rhineland, Holsteiner, Oldenburg, Hanover and Thuringia.