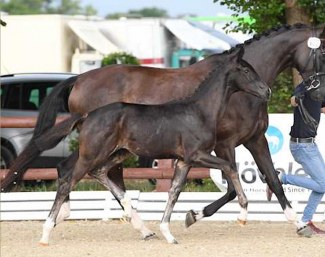 Secure your dressage star of the future through the 2019 PS Online Foal Auction which began 8 August and will conclude on 18 August 2019.

For the seventh time Paul Schockemohle hand-picked a collection of foals and this time in partnership with Helgstrand Dressage. Eighteen jumper and dressage bred foals are offered for sale online, all with top pedigrees.

Sires for the dressage lot include World Champion Totilas, the Nurnberger Burgpokal winner Vitalis, German Champion So Unique and the twofold stallion performance test high-flyer Sezuan's Donnerhall, amongst others.

The sire Sezuan's Donnerhall was the only four-year-old stallion to win both his 14-day test in Neustadt/D. and his 50-day test in Schlieckau (with 9.19)!

The stallion Donovan and many dressage horses also descend from the dam line.

The sire Zenon, sired by Zonik who came seventh at the World Championships and eighth at the World Cup, produced an excellent crop of foals in 2018 and is currently very popular thanks to his offspring, who demonstrate fantastic paces.

The offspring of the dam St.Pr.St. Hirtenmelodie are successful in young dressage horse classes.

The grand-dam Hirterra produced the licensed stallion Society (by Sandro Hit), who was successful up to intermediate (M) level. Her half-sister Hirtara (by Rosier) produced numerous stallions: the full brothers Sting and Sting II (both by Sunny-Boy) as well as Bergolio OLD and Bambolero (both by Bordeaux). Sting won team silver at the Junior European Championships in 2013 with Dana van Lierop/NED.

With Fürst Toto, himself a descendant of the successful combination of Fürstenball and Totilas, another young talent now sends his first promising offspring to the stage of this online auction.

The dam St.Pr.St. Jody is the full sister of Stoneman, who is internationally successful in classes for Young Riders. She has already produced several horses who have been placed in young dressage horse competitions, such as Gut Wettlkam’s Furby (by Fürstenball) ridden by Lisa Müller.

From the Oldenburg line of Jonande II also descend Aquilino, winner of his performance test and successful in Grand Prix, Fredo, Lysant, Walderfalk, Stew Boy and Weltweit, as well as the Oldenburg premium stallion, Feinblick.

Explore the complete collection at https://ps-online.auction/en/