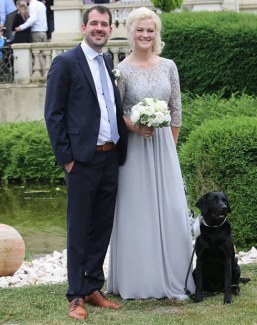 Swedish Grand Prix rider Malin Nilsson got married to her partner, German Steffen Wahlkamp, on Saturday 2 June 2018. "We signed the paipers today with our closest friends and family and next year we will celebrate big," said Nilsson about her civil marriage. Her close friends, Australians Briana Burgess, Lyndal Oatley and employer Patrik Kittel, were amongst the guests.

The 80-year old Swedish Grand Prix dressage rider Ulla Hakanson continues to set records! By competing at the 2018 Swedish Dressage Championships on 8 - 10 June, Hakanson has participated in her 48th Swedish Nationals in her career! Take about the Grand Dame of Dressage !

Former Italian youth team rider Chiara Prijs-Vitale is engaged. The 23-year old Dutch based rider said yes to a wedding proposal by her boyfriend of one year, Giuseppe de Luca. "What started as a drink on the beach in Scalea last summer with google translate as he didn't speak English and my Italian is poor ended in a long distance relationship between in Sardenia/Amsterdam," Prijs explained. "As of the beginning of this year we live together in Castricum and it's very special that he took this step without any doubt. We are just back from a weekend in Rome, which was a total turn in events as I said yes."

Helen Langehanenberg has given birth to her second baby, a girl named Finja. Helen will return to the saddle next week as she aims to compete Damsey at the 2018 CDIO Aachen, the final German team selection trial for the World Equestrian Games. Helen and her husband, veterinarian David Lichtenberg, are already parents to daughter Malin.

Patrik Kittel's first international Grand Prix horse Pasteur has passed away at age 27. Kittel competed the Swedish warmblood gelding (by Vivaldi x Caracas) internationally between 2001 and 2004. He was retired to the field at Kittel's yard in Appelhulsen, Germany. Kittel wrote on Instagram: "You been a part of my life for 23 years from the first day my mum saw you and said you were the one. We been together, winning int Gp. Reserve for Athen Olympics. VIP Oldie since 10 years. Your heart your quirkiness and your passion to please will stay with me forever.. will miss you forever."

Australian dressage rider Jayden Brown has decided to leave his position as head resident rider at Mount St. John brood farm in Felixkirk, U.K. Brown has returned to Australia to pursue new adventures. "We want to say big thank you to Jayden Brown for his great work at Mount St John and for achieving super results with our sport mares, including winning 5 regional titles and getting 3 reserve National Championship titles in the year he spent with us," said MSJ's Emma Blundell.