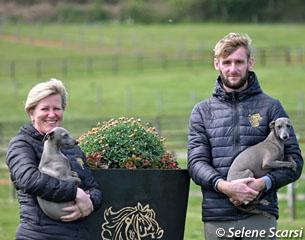 Al Shira’aa Stables was founded by Her Highness Sheikha Fatima Bint Hazza Bin Zayed Al Nahyan to support, develop and promote all aspects of equestrian sports and horse care, both in the Middle East and on a more global level. Al Shira’aa’s main base, in the heart of Abu Dhabi, hosts a wide variety of horses, from broodmares to youngsters, from top-level showjumpers to retired horses, with a particularly keen involvement in showjumping, as demonstrated both by Al Shira’aa’s support of the junior and YR showjumping teams in the UAE, and by the recently-established, substantial sponsorship agreement with the iconic Hickstead international to sponsor their Derby show and the Derby Class itself for the next three years.

The Sheikha is actively involved in the brand’s development and is a keen rider herself: she is an enthusiastic, but private and reserved, horsewoman who spends a substantial amount of effort rescuing horses, as well as dogs, both across Europe and in the UAE. Her farm in Surrey has over fifteen dogs of all shapes and sizes, some of whom have been rescued, together with over thirty horses: alongside the youngsters and horses in training, there are also some who are living out their retirement, finding new roles such as nannying youngsters and acting as field companions to broodmares. In addition to the main stables in the Middle East, Al Shira’aa boasts several farms in the UK, Germany, Ireland and Spain that serve as bases for dressage and showjumping horses, as well as show Arabians. In Spain there is a breeding operation for PREs and Arabians; Germany and Ireland accommodate sporthorses; and in the UK the focus is on dressage, although the Surrey yard also hosts the showjumpers during the summer months. Two further UK yards house, respectively, foals, and broodmares, retirees and horses in training. 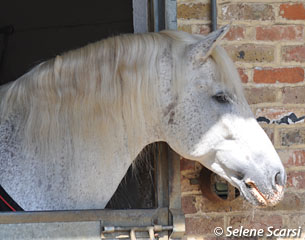 The UK face of Al Shira’aa is Wexford-born Tom O’Brien, who, as UK Operations manager, supervises the UK-based dressage and showjumping horses, as well as the horses who come from around the world for rest and recuperation. Tom’s background includes hunting in Ireland and eventing in England; he decided to focus on dressage after training at Talland, having fallen in love with the challenging nature of the discipline. He has been working for Al Shira’aa since 2013.

This specific love of dressage is shared by Her Highness herself; for her, it was initiated by Eclipse XIX (Novelero XVII x Dergano), a now-retired 17-year-old PRE born and produced in Spain, but also an international jet-setter who travels with her whenever possible, and with whom she has always had a great connection.

A Platform for Women

Al Shira’aa’s interest in the discipline of dressage was then further spurred by the fact that the sport is female-dominated. “There is a keen desire to increase the presence of women in sport: Her Highness would like to encourage more women to come out and compete, making it more accessible,” says Kate Moisson, a chartered surveyor, who is part of the Al Shira’aa team and deals with their UK projects, working closely with Tom. 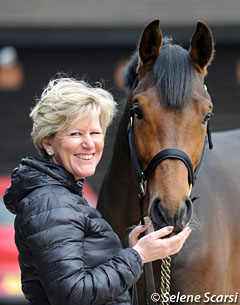 Dressage is clearly the discipline that most easily offers that. The interest in women’s participation in equestrian sports runs deep through the family; Her Highness’ grandmother, Sheikha Fatima Bint Mubarak, president of the General Women’s Union, Chief Executive Officer of the Family Development Foundation and President of the Higher Council for Motherhood and Childhood and four-time ‘Mother of the Nation’, ran the Fatima Bint Mubarak Academy (FBMA) International Show Jumping Cup 2017, and made sure that, in keeping with FBMA’s broader goals, the competition provided a special platform for women, who form the majority of Emirati participants.

At the moment, there is a junior and young rider team competing under the name of Al Shira’aa, who tend to ride Al Shira’aa horses, and there is a strong hope that in the future a dressage team might be developed, with a special emphasis on female participation in the sport. One plausible way of doing this is through the hosting of competitions. Last year, Al Shira’aa organised an international CSI4* which Longines were involved in, and a small dressage national at the same time, and the plan for 2018 is to build on that by possibly introducing a small invitational international, with the aim of raising standards in the Middle East, perhaps combining the invitational with a clinic or masterclass with a top rider or judge. The international would therefore not be a sterile end in itself, but, rather, the explicit expression of a strong desire to spread and share knowledge and educate. “At the moment there are very few Small Tour competitions in the UAE to aim for, and an international show able to attract recognisable riders would give future potential stars something to aim for, just as successfully happens with female athletes in showjumping,” explains Kate. 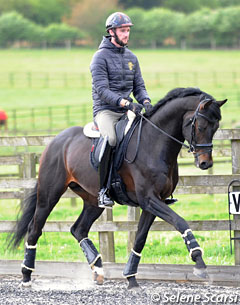 Tom is ultimately responsible for creating and cultivating the Al Shira’aa dressage section, which is still in an embryonic, but highly promising form, with a small but exceptional selection of horses. There are plans to expand the dressage string over the next year or so, with Al Shira’aa looking to buy a few foals over the summer, both at auction and from private breeders, to further enhance the youngstock base, as well as purchasing a couple of other young horses, already under saddle, so as to have a couple of horses in work in each age range. “We want to start small, and maintain an understated approach. We want to work organically, investing primarily in the training,” explains Tom. “This is also why we prefer to buy foals to two-year-olds, as then we have a chance to produce them correctly right from the beginning, as long as we can see the underlying talent,” says Tom. The long-term goal is to establish a small breeding programme, creating a mini-business to be developed nationally at first and with a firm emphasis on correct training from the start, turnout, and wellness and care of the horses.

In accordance with this philosophy, the horses are only schooled three days a week, with a normal routine including exercise on the water treadmill on a Monday, schooling proper on Tuesdays and Wednesdays, a relaxing hack or a day off on a Thursday, schooling again on Fridays and then more hacking and a day off over the weekend. The emphasis is on fitness through fun: this means a lot of variety, such as cavaletti training, and plenty of hacking – the safe, hilly hacking at the Surrey yard forms an irreplaceable part of the training programme. 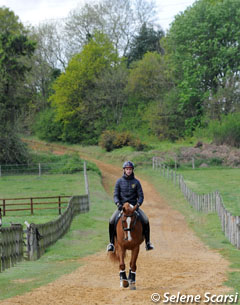 The small team at home, who help with the riding, can enjoy the depth and breadth of experience of the jumping jockeys. Tom trains fortnightly with international dressage rider Sarah Millis, who is based nearby, with Zoe Sopp taking over the schooling and training when he is away. Her Highness has given Tom the opportunity to compete her horse Tito, a ten-year-old DWB gelding by Millennium (Stargolds Cavalero) out of a Cassalus Egensevang x Zarif Langlokkegard dam, sourced through Assouline dressage. The chestnut gelding has been out winning at advanced medium and has now successfully debuted at PSG, competing at the early summer Premier Leagues. Tito is now in Europe with the Sheikha who is very much enjoying riding him. When Tito is in the UK he is joined by Eclipse and another grey PRE stallion, Jubiloso LXI (Undigo IV x Quintaseuno II), who has been in the UK since 2014 having spent time in Abu Dhabi and Spain and, at twelve, is now working at advanced medium.“Her Highness loves the genuine kindness of Spanish horses,” says Kate.

But the real jewels in the dressage stable are two exceptional young bay stallions. The three-year-old Hendrik, KWPN by Davino x Rhodium x Gribaldi, was purchased at the Equine Elite auction last October. The horse has three world-class paces with a super active hindleg. “He stood out massively,” explains Tom. “When he turned three he was backed and ridden away for a few weeks, coped brilliantly with the entire backing process, and is now turned away for the entire summer to be re-started in September,” he adds. 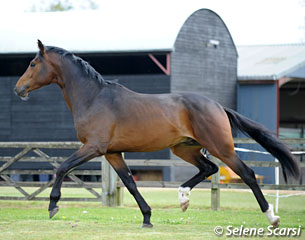 One year older and equally impressive, Indigo TC – ‘Tim’ to his friends – (by Dream Boy x Kennedy x Highline) was sourced through Suspension Dressage, run by Lotty Chatterton with Charlie and Abi Hutton. “I’m really grateful to Lotty for sourcing the horse. We saw him ridden at Eugene Reesink’s in Holland; he had good feet, good limbs, was very quiet, and I liked from the minute I sat on him. He had a great walk, but when I asked for canter it felt like I was going to heaven: he has an amazing canter,” reminisces Tom. The stallion, if ready, will compete in young horse classes; like any future purchase, there is always an eye to age classes, but only if the horse is up for it. “It really doesn't matter if they miss a year,” insists Tom.

It is this non-negotiable commitment to the highest standards of excellence in the care and performance of horses that Al Shira’aa want to continue to build on, in order to enhance and promote good, clean sport in the UK, Europe and beyond. Of course, Al Shira’aa, as a competitive brand, want to succeed in sport, but not at the expense of the horse: the primary focus is on care, compassion, and the creation of the genuinely happy equine sports athlete.