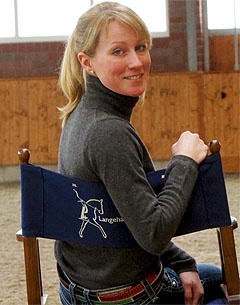 DressageTrainingOnline.com is thrilled to announce the addition of world-class rider and trainer Helen Langehanenberg as a permanently featured trainer in their online, on demand video training library of over 1500 training videos which are viewable on any digital device.

“We will be releasing a new video each month over the next year featuring Helen riding and training the horses and riders in her circle,” says DTO founder Reisa Bonetti-Sullivan. “We are pleased to be able to share her formula for success with the dressage community. I’d viewed Helen’s style of teaching, and knew I had to have her. Being a good rider or trainer doesn’t always mean you can teach. Helen is excellent, very systematic. She really thinks through each step of her ride and can effectively explain it.

“This is important for someone watching and learning, because it’s not always about how or what is the aid, but often it’s what am I aiming for right now? It’s easy to get lost while schooling a horse and not have a plan. Helen explains her plan, step by step.”

Being able to watch Helen Langehanenberg ride and train is an amazing opportunity for any rider to learn from one of the best. In 2012, she placed second in the World Cup finals and took home a silver medal from the London Olympics as part of the German dressage team. In 2013, Langehanenberg won the Equestrian World Cup Dressage Final in Gothenburg on Damon Hill, scoring 88.286%. She became the eighth German in the history of the tournament to win the title. In February of 2014, she rode Damon Hill to yet another victory in the World Cup Dressage 2013/2014 Western European League, scoring a personal best 90.375%.

But again, it’s not only the riding and training. This past January, Langehanenberg gave a two-day clinic for Swiss Young Rider and U.S. Team members at a Swiss Equestrian Federation clinic in Berne, Switzerland. “Dare it, it’s only training,” she encouraged them. Her philosophy is simple: Train the horse according to classical principals. Ask only what the horse is able to do at that time. Communicate joy of work to both horse and rider.

“Logging in to DressageTrainingOnline.com and accessing our training videos in every equestrian topic and discipline from the most vetted and reputable sources is a powerful tool,” says Bonetti-Sullivan. “If you’re going to learn, you should learn from the very best.”